My iPad is not liking WordPress so please excuse the formatting errors and typos. It takes way too long to try to fix them.

I visited Bran Castle this morning which is “Dracula’s”, but in reality had nothing to do with the book and very little to do with Vlad the Impaler. It just looks like it would be a good castle for the book. I had a frustrating time getting there (two buses), taking over 2 hours. Coming home it took me less than an hour which was nice. One minibus I took had 4 guys that were carrying scythes (which are really big) to go work in the fields. At the castle I was amazed by the number of young kids that I saw, more by far than at any sight in China, Jordan, Israel, or Ecuador. There were also an impressive number of infants who were visiting the castle.

I so far have found the food to be very meat based. I have also found a lack of street food that isn’t shawarma or pretzels. I was just in Jordan and had my fill of shawarma there and pretzels will only take you so far.

In the afternoon I took a train to Sibiu which in my mind was a town of 5,000 when I discovered I was mistaken and it is a town of 150,000. I think that I wanted to go to Sighausora which is a town of 20,000. The train station is the most decrepit one that I have seen with shells of long discarded trains, crumbling concrete, and an overgrowth of weeds (not the golden rod that covers the countryside). It took a walk of about 250 meters to discover the old town and why I came here.

Tonight I had a food win. It seems like all the restaurants in the town only sold pizza, but most people were forgoing food, opting for ice cream instead. It seemed that every eighth person was chowing down on a bizarrely colored ice cream cone. There were at least 30 soft serve ice cream machines pulled out on the cobblestone street selling ice cream for $0.66-$1, depending how much you wanted. I ended up in a place that didn’t list pizza until the last page of the menu and ordered bulz ciobanesc. It was a roasted corn meal mush (kind of like polenta but better then any polenta I have had) and cheese base with lean crispy bacon and sausage on top covered in sour cream and a sharp (non cheddar) cheese. It might have been the richest thing I have ever had to eat. I had to leave most of the sour cream and cheese and my dinner set me back $8.

I have only been in Romania for 48 hours, but it feels much longer. I think that it is partially due to how long I have spent on trains and buses. I think that I am going to modify my schedule and spent two nights in Sibui instead of the one that I planned and then go to Maramures. I kind of feel like I am rushing through Transylvania (which I am). 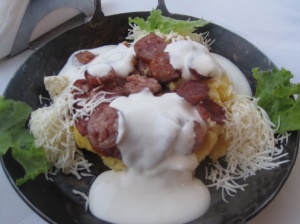 Meat in the grocery store, I got yelled at for taking this picture 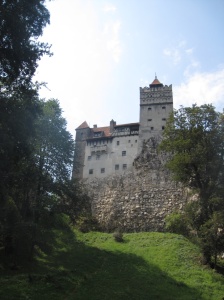 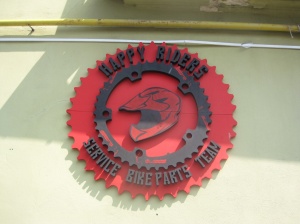 I saw a for real cross bike yesterday and was jealous 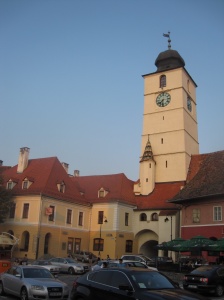 Like Loading...
This entry was posted in EUROPE, Romania and tagged backpacking, bran, Dracula, Romania, sibiu. Bookmark the permalink.