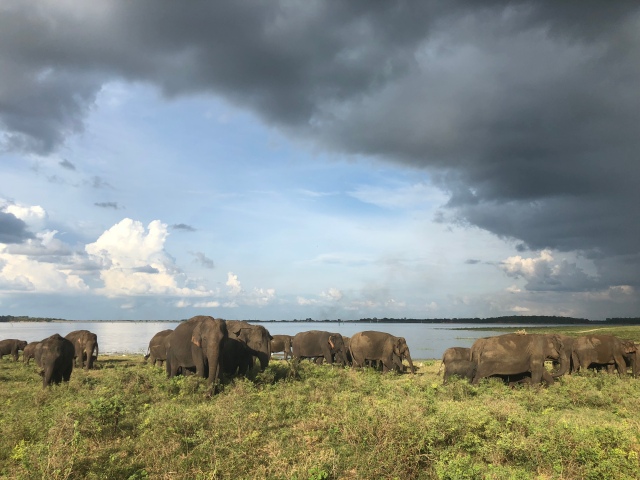 One nice thing about Sri Lanka is that even when it rains so hard that it floods your hotel room, six hours after it stops you can’t even tell it rained. The country seems perpetually damp, (my hair loves it) which might be a side effect of the 90% humidity. Along with the rain drying, morning brought a Katy that was no longer feeling sick (which she attributes to her immune system of steel) which was AWESOME. The previous night, I got cocky when I was able to stay awake past 830pm and didn’t take a sleeping pill, so of course I woke up WELL before 6am. We decided to go to the Temple of the Tooth before our driver picked us up at 9am. 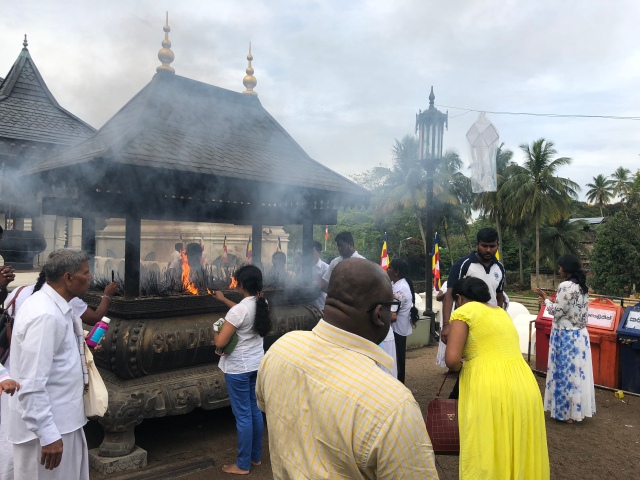 Outside the Temple of the Tooth, my eyes only watered a little bit

We were two of three foreigners at the Temple when we arrived, but being Sunday there were a ton of locals. 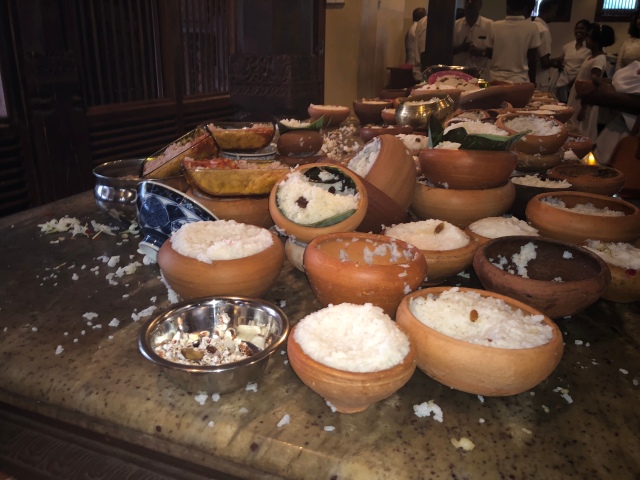 Offerings in the Temple of the Tooth

One thing with Sri Lankan tourist sites is they have foreigner pricing which ranges from $6-$30 for a site, which is disproportionately more expensive than local pricing.

We then had a prebreakfast coffee and went back to the hotel so Katy could have a quick dip in the pool before breakfast. The British first tried to grow coffee in Sri Lanka and that did not work out too well (disease), so they ended up switching to tea. Today some coffee is grown in Sri Lanka, but a lot of it is recent cultivation and not coffee plantations that are still in operation from the first attempt to grow coffee. 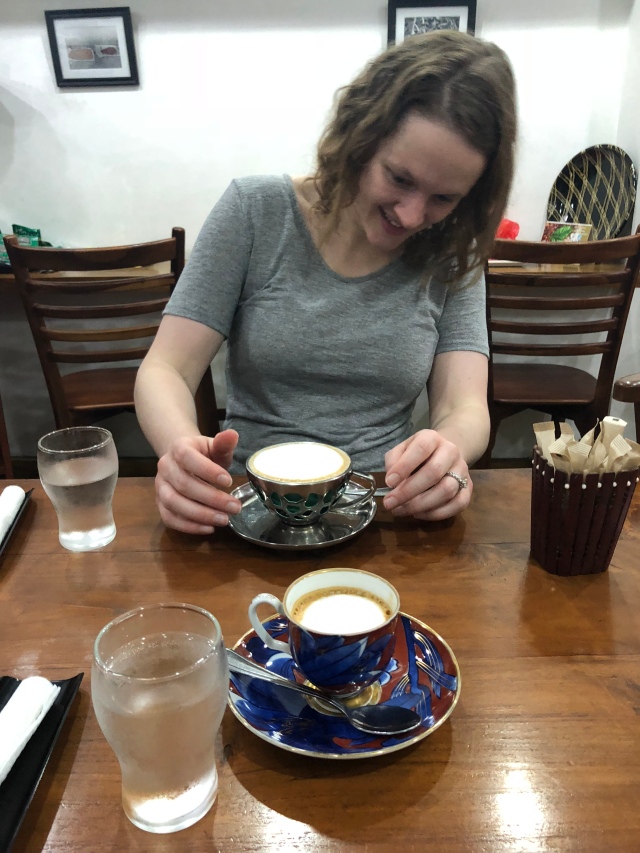 Katy about ready to enjoy her Sri Lankan coffee. Sri Lanka primarily grew coffee until a coffee blight reeked havec. They then switched to tea

We then hopped in the car for a couple hours to the Dambulla Cave Temple. Along the way Suminda pointed out peppercorns that were growing along the road. I would say Suminda has intermediate English; he understands 70-80% of what we say and speaks slightly less than he understands.

We then reached the cave temples, where Suminda dropped us off on the back side, and then we walked down the main way up. This was a win because of course the caves are on top of a hill, and the front approach seems about three times as long as the back approach, and if I forgot to mention it, Sri Lanka is humid and hot. I mean a constant 1-3mm of perspiration on your skin humid and hot. I mean melt your sunscreen off your body so it runs hot and humid. 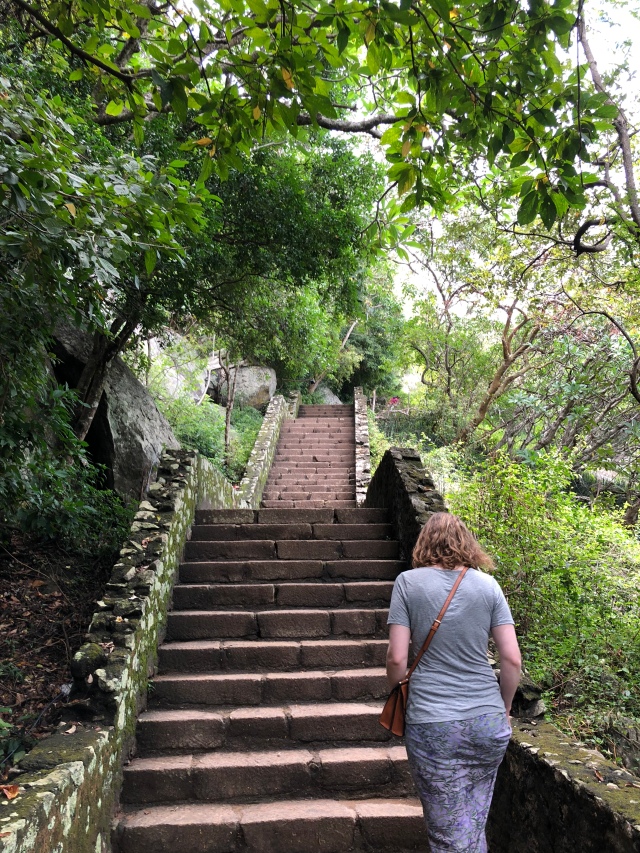 Lots of hot stairs to go

The main draw of the UNESCO heritage site are the cave frescos which originally date more than 1000 years ago and are in surprisingly good shape. There is also an important reclining Buddha statue that was carved out of the rock wall. 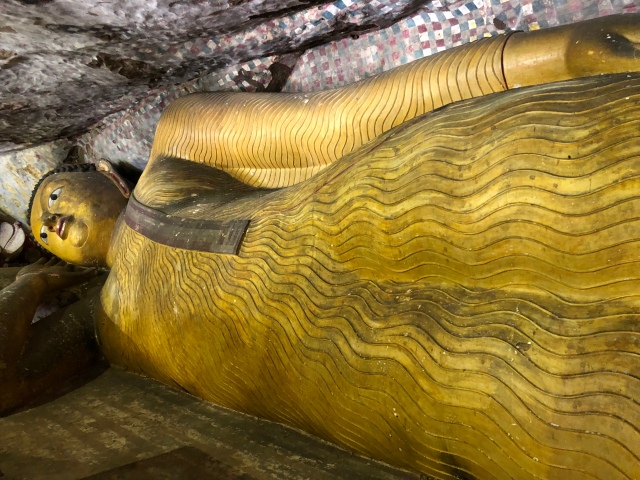 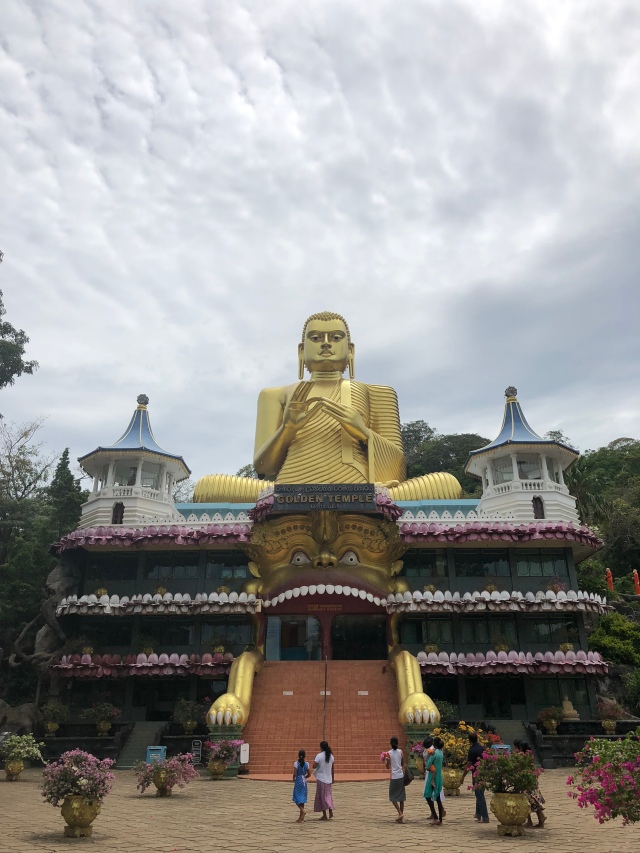 We grabbed some lunch and then headed to do a safari. I had not arranged one ahead of time since you normally do it through your hotel, and we were not checking into our hotel yet and left it to Suminda. I knew the price should be between $60-$100 with a good ballpark of $80-90. The place wanted $200. I was not happy. I then entered into bargaining without knowing I was bargaining. My unintentional tactic was to stand there with my mouth gaping open in silence after confirming the price. After a rather long uncomfortable silence, he came up with a new price of $80 for 2.5-3 hours to visit Kaudulla, not the more famous park we had planned to visit, stating that Minneriya was closed (which I knew for a fact it wasn’t). He also couldn’t guarantee that we would see elephants because it was rainy, and they were not congregating in the “tanks”. We went with it anyway and hopped in the back of a jeep without seatbelts, which Katy loved, and began our 40 minute drive to the National Park. There were a bunch of jeeps at the park when we arrived, which decreased my concern that we had been swindled.

The national parks are around “tanks”, which are large man-made bodies of water that during the dry season recede uncovering new growth, which attract animals including elephants. This area is suppose to be in the dry season, but has been unseasonably wet, so Minneriya, which is usually the last tank to dry up thereby attracting the region’s elephants, wasn’t full of elephants since the surrounding tanks still had water, which is what I assume he meant by “closed”.

We turned around a bend in the park and saw about 10 elephants grazing and admired them until they turned tail and headed back into the jungle. 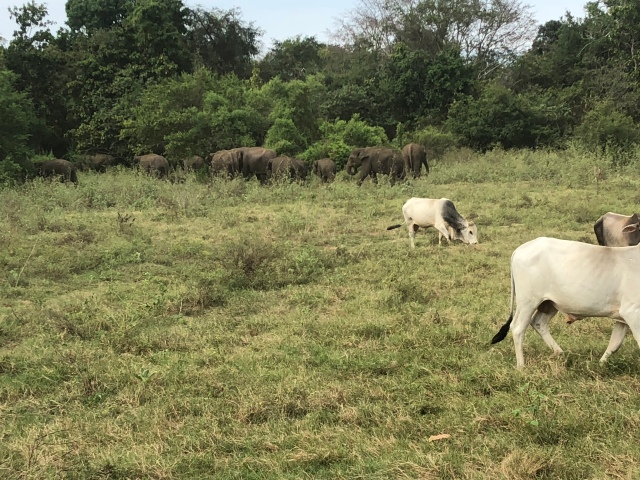 The first batch of elephants we saw

We then went around another bend and encountered a group of about 50 elephants with multiple babies. The star was a baby that our driver estimated was about 5 days old. It had a hard time going 5 minutes without toppling over and was a blast to see. Along with seeing 70+ elephants, including multiple elephants with tusks (less than 5% of Sri Lankan elephants have tusks), we saw some spotted deer (which were tiny), Sri Lankan foxes (which are like small coyotes), peacocks, and a wide assortment of birds. 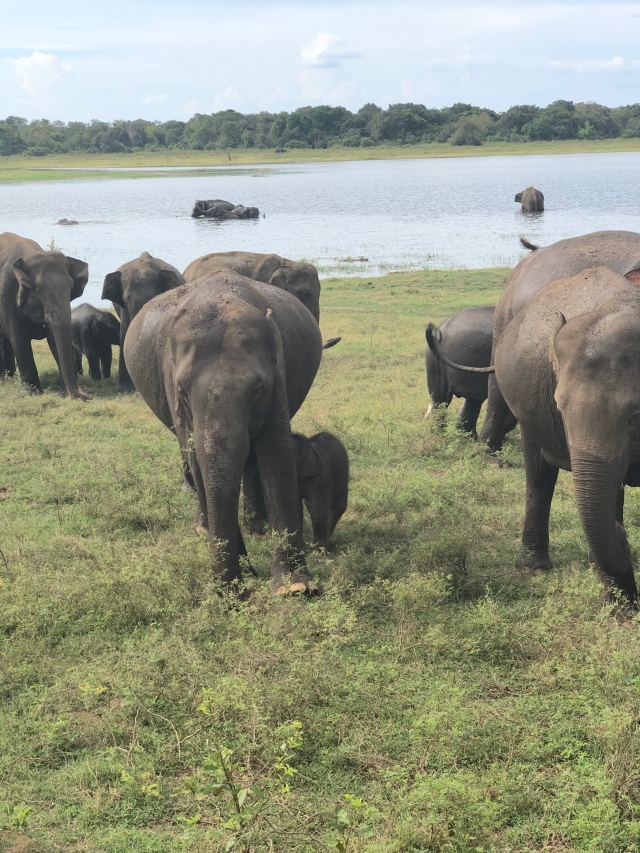 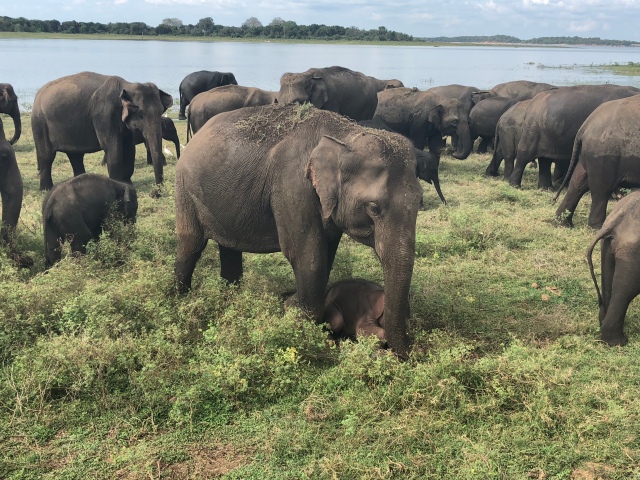 Five day old elephant giving up on nursing and standing

I thought the safari was going to be pretty lame, but it was actually way more enjoyable than I anticipated and turned into a 4h+ trip where we didn’t get swindled and were very happy. (Katy would like to note that she takes all credit for this idea) 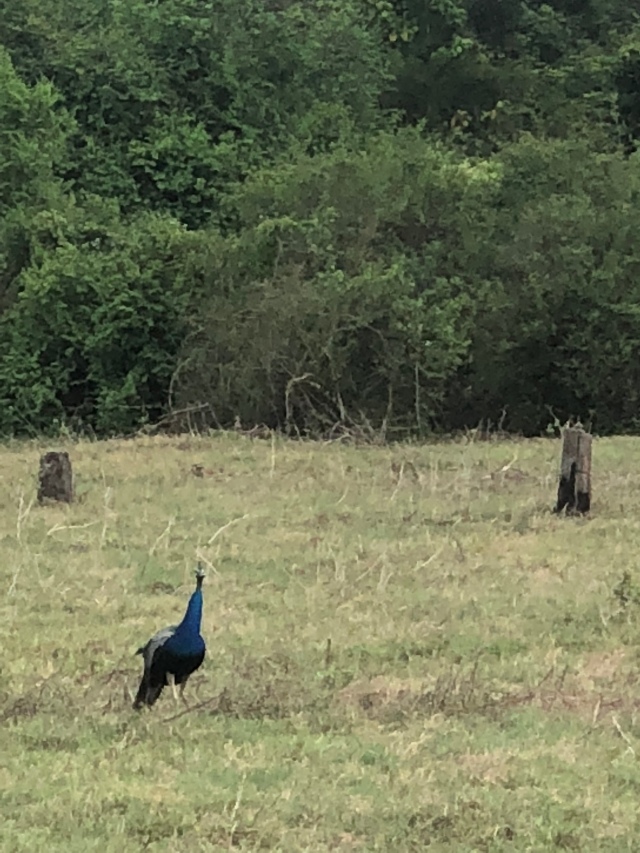 Peahen. They are like colorful turkeys except without the head bobble

We then headed to the hotel and after a slight navigation error got there a little after sunset. We picked this hotel because Katy wanted to stay in a treehouse, and she wanted a pool. Our treehouse was fan cooled and shortly after we arrived so did the monsoon. The monsoon knocked out the power and made its way inside the room, unfortunately dripping on the bed. Power was restored; a dry bed was not, but fortunately the wet section was only about a foot in diameter. The pool went unused for the night, as we were already quite cool and wet from the rain.

We ate dinner, and I had my first beer of the trip, which turned out to be my undoing for the night, bringing on the sleepiness.The fan cooled room turned out to be quite adequate because the rain brought wind, a cross breeze through the room, and a good drop in temperature. I made it until about 8:00pm (after several “Hey! Wake up!” prompts from Katy) and then crashed hard, really really hard. 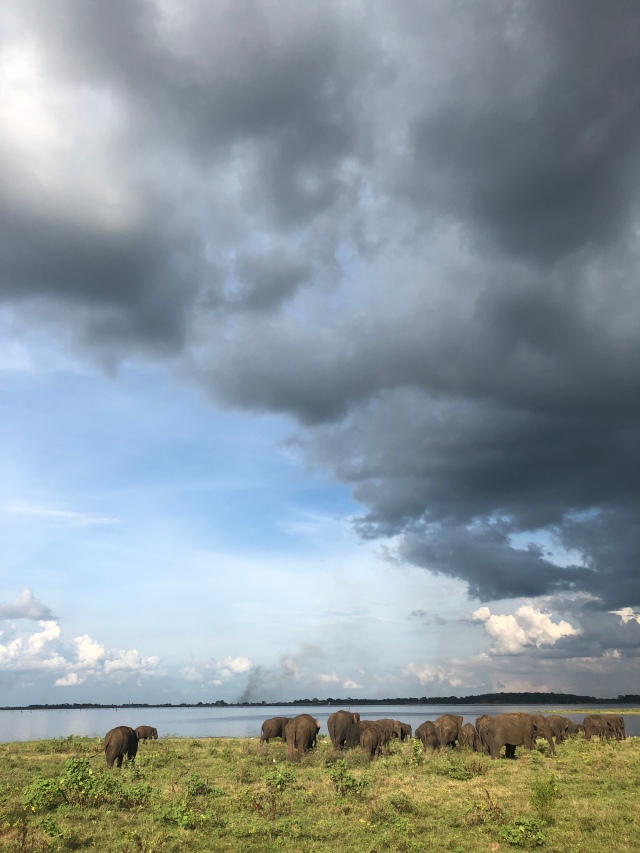