Istanbul is Hot in August, the Pool at the Ritz is not

Our third day in Istanbul denoted when we were down to only one week of honeymoon left. We went down to breakfast, and they remembered our breakfast drink order, one coffee with cream and one Turkish tea, and brought it without asking. Our first stop of the day was to take the metro to the Hagia Sofia.

We tried to get there when they opened and were able to see a lot of the palace before the tour groups showed up. When we left a line (in the bright, unsheltered sun) had formed to get tickets. Did I mention that Istanbul is hot?

We then headed to the basilica cisterns, which consist of a large subterranean room with a bunch of Roman columns holding it up. It fell out of favor a bit ago when people decided they wanted running water instead of drawing their water from a pit.

We then decided to wander over to the bazaar. There is a large covered grand bazaar and a much smaller covered spice bazaar, but in my opinion the outside streets around the bazaar are the more exciting part. At this point Katy decided she wanted a kumpir, which is basically a mashed potato with a ton of fixings for lunch. The issue is that they are not the most common food item in this section of town. We spent a solid two plus hours while wandering around the bazaar looking for a kumpir.  We finally backtracked to near our hotel where we had previously seen them for sale to find her lunch treasure (Katy says: absolutely worth all the sweat and toil). 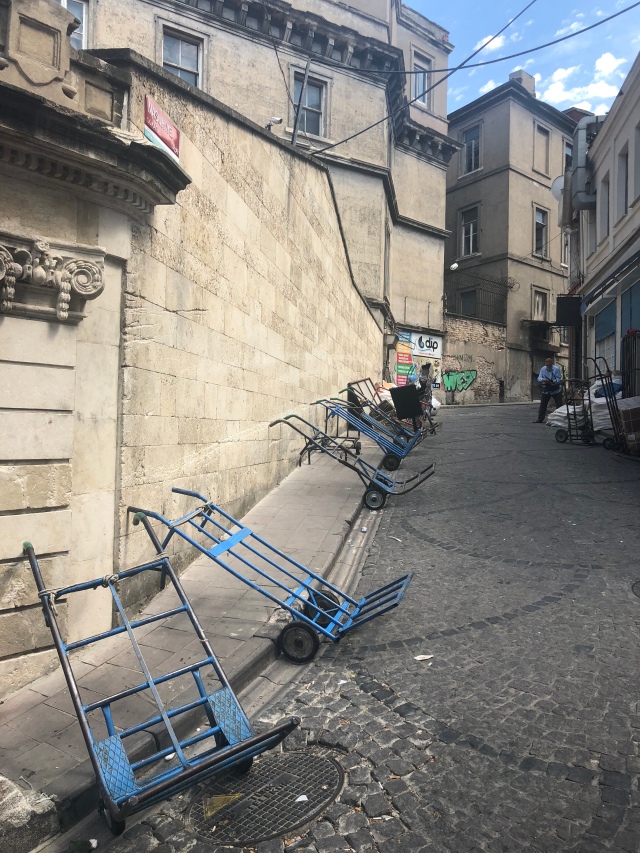 Carts that workers use to carry peoples purchases through the bazaar

We then wandered the rest of the way to our hotel and went to the pool for the rest of the late afternoon. We then walked down to the road along the Bosphorus and north along the shore looking for a place to eat dinner. We walked over a mile to the north, which took us away from a lot of the western tourists. We picked a fish restaurant overlooking the straight. Katy decided to be a little adventurous and ordered a Raki to drink. Raki is an anise flavored beverage that you add water and ice to in the right combination, and it makes it cloudy. I really liked it and Katy liked it more than she thought that she would.

We then tried to order a taxi on Turkeys taxi app and failed. There was a ton of non moving traffic, and the fare was suppose to be $3, but there were not enough drivers to satisfy demand. We tried to take a taxi from the street, but they wanted $10, too much. Katy then opened up google maps, and within 2 minutes we hopped on a bus that was jammed pack and took that most of the way back to the Ritz (Katy: turns out there was a soccer game at the municipal stadium, which was next to the hotel; we could hear the crowd cheering from the lounge). 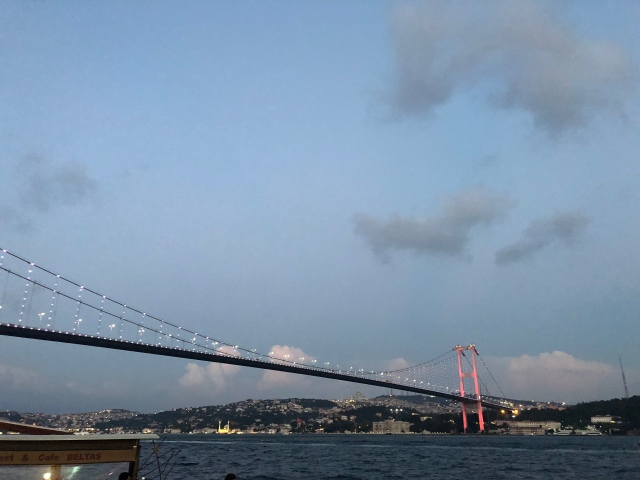 Our last full day in Turkey we had one place on the agenda, Topkapi Palace. We tried to time it when there wouldn’t be hoards of tourists, but there were still hoards of tourists. It was a a rather large palace complex (Katy: it was massive and beautiful, despite being so hot; and I at least had no idea that the Ottoman Empire lasted well into the 20th century, so it was very interesting to learn about the history). I would say the Topkapi Palace and Hagia Sophia were my two favorite landmark tourist attractions in Istanbul.

We then headed back to the markets and ultimately back home. One large difference between the bazaar in Istanbul versus Bishkek is that a lot more of the bazaars are geared towards tourists, and there are a lot more touts bothering you. There are still (significantly) less touts than Morocco. It is justifiable that the bazaar is more tourist oriented because there are exponentially more tourists in Istanbul than Bishkek. Istanbul is definitely more expensive than Mongolia, but a lot of the cheap souvenir trinkets were still cheap. A lifesaver on dealing with the heat was that a bottle of water cost the same amount as using the public toilet, $0.20. I kept at least one one lira ($0.20) coin in my pocket at all times, so I could have a bathroom break or water on demand. As much as I am not a fan of paying for toilets, when they cost less than a quarter I am less irritated, especially when they are clean.

We wandered back to our hotel, and I went to the pool for the rest of the day, while Katy went and had a hamman treatment, which is basically a combo bath/massage (Katy: and was amazing!!!😍😍😍). We then went out and had our best meal of the trip at a sea food restaurant that was enough off the main drag that we didn’t hear any other patrons speaking English. Katy got a whole sea bass, and I got the anglerfish (Katy: google it, it’s one of those deep sea monsters), which is a type fish that I am not sure if I have ever seen on the menu before, and both were really good. 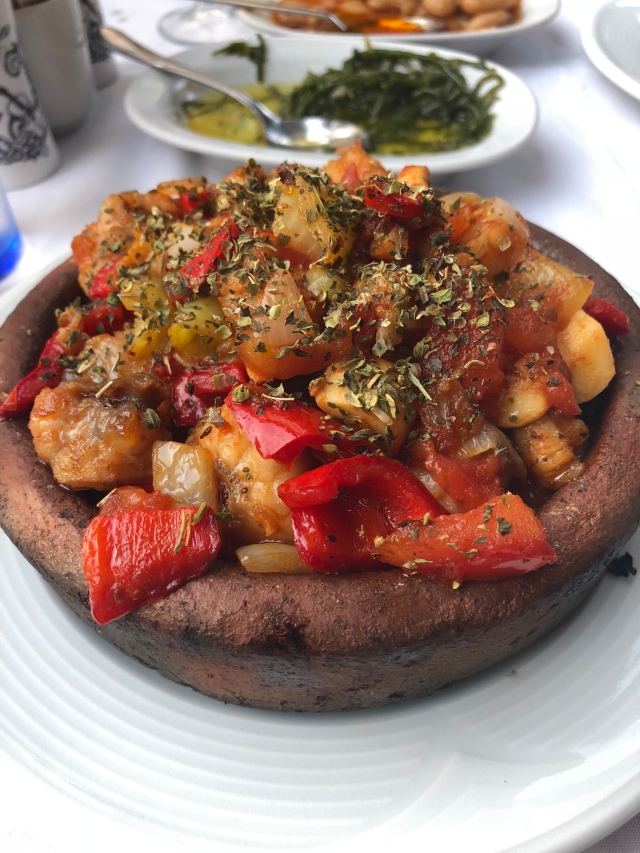 Turkish Airlines had changed the time of our flight to Croatia to a couple hours later a few months ago, and I wasn’t able to find open seats on the earlier flights, so we ended up with almost another full day in Istanbul.

We spent the next morning visiting the bazaar trying to snag the last few trinkets of our trip. It worked out that in the last 50 yards of our trinket hunting, we discovered multiple stores that had the stuff we were looking for cheap. While we were walking through, we passed several news agencies filming in front of banks and currency exchange offices and didn’t think anything of them. We then discovered later that day that they were filming because of the sudden drop in the Turkish Lira. We didn’t really get to take advantage of the stronger dollar conversion for the lira, except for the hotel. They charged us the exchange rate based on the day we checked in and the credit card paid the transaction when we checked out so we got the exchange rate of when we checked out, which resulted in it being 25% cheaper than we anticipate for a total of $501 (Katy: including my hammam and all the booze at the pool). We then took a taxi to the airport, and he took the long way, which cost us an additional $4, but it irritated me so I gave the driver a piece of my mind when we got to the airport. We spent most of the afternoon at the hotel getting a 4pm checkout, so we had minimal time in the Turkish lounge, and it turned out to be Katy’s favorite one of the trip (Katy: but I did squeeze in one last dip in the pool as a result of the late checkout, so I don’t know that I entirely regret that choice…).

Turkey was a great country, and Istanbul seemed like a truly European city with all types of people in all types of dress co-mingling. 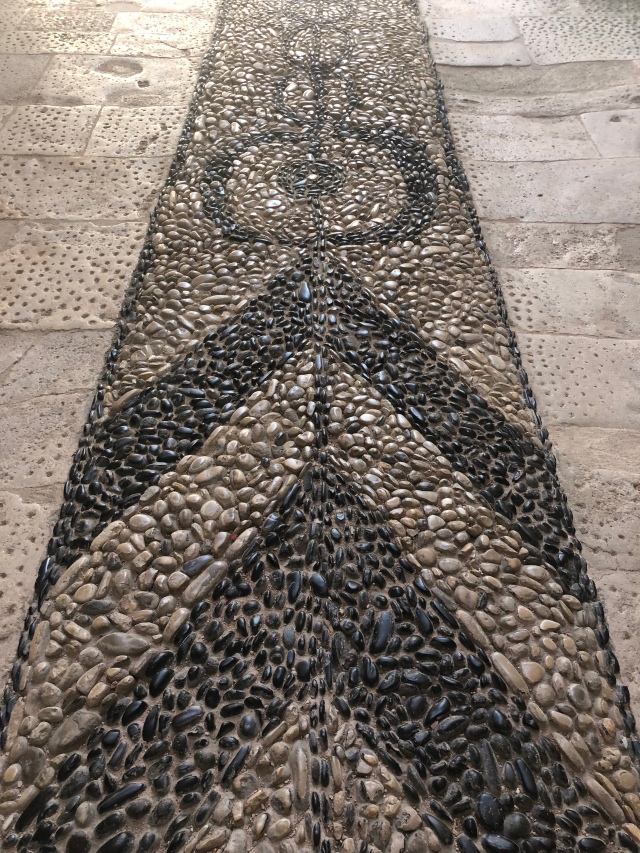