Wat Phu Tok=Wat With No Westerners

Today has been another good day. I have gone from waking up at 6am to 6pm without seeing another westerner. I left for the bus station at 630am to attempt to catch a 7am bus to Bueng Kan (Bung Kan). Needles to say my pronunciation of the town name was pretty terrible (there was no what the fuck did Todd say dictionary to translate) and it wasn’t until I pulled out my Lonely Planet with some Thai script was I escorted to a mini desk that supported a mini bus. The mini bus was brand new and left 10 minutes after I got on, 1/4 full. It must have been an express because we made 200km in less than 2 hours and we only picked up one person on the way.

I got a jumbo (large tuk tuk) to take me to a temple on the side of a mountain that was as out of place as a random mesa surrounded by flat. I paid how much the lonely planet said it would cost, 800b (33=$1), which I thought was pretty steep. It was about a 1.5 hour ride in the tuk tuk and I figured I would wonder around for 2 hours.

The first thing I noticed was that there was not one sign in English and after a wrong guess I started to wander up. Since my Thai reading skills are as good as my Farsi and Arabic reading skills I had no idea what the signs were saying. My theory was to go up and to the right whenever possible (being a circle I figured that would get me to the right spot). Holy shit was it scary, walking on old wooden planks supported on the side of a pretty shear cliff. The boards that were not nailed down were the worse and the railing on the outside was designed for someone who is 5’3. The views were pretty awesome and the ending part was on top of higher “mountain” in junglish terrain. I eventually got to the temple and discovered that going down was not going to involve any 2-4 foot wide walkways on the side of the mountain. To set the record straight after I got to the top I took off my long sleeve shirt. It is suppose to be warmer in Thailand. 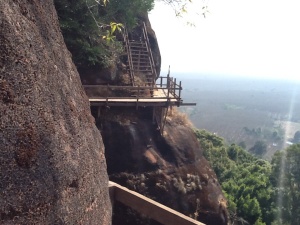 This is OSHA approved 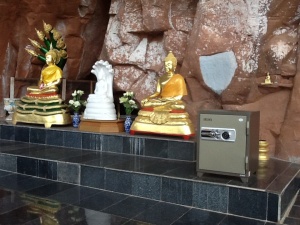 Buddha and a safe, not really sure what is going on here

The tape measure that won’t die 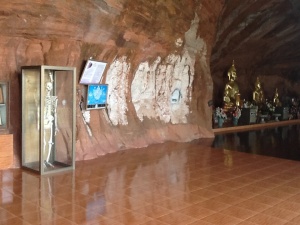 Getting supplies up the hill

Everyone I met (4-5 parties) said hi and we spoke a couple sentences of English. They mainly wanted to know where I was from. They were brief encounters, but fun ones. I hoped back on my tuk tuk to Bueng Kan where I discovered the next bus to Nong Khai was in 1:50 (I probably missed it by 10 minutes). A gentleman rook my from the tuk tuk drivers and told me when the next bus was coming and the number of it. We chatted for a few and he then asked me if I hade eaten. I said no and he pointed out a restaurant and said the owner spoke bad English and I was 40 baht and you pointed to what you want and was good (and, and, and, if I didn’t throw enough in the last sentence). I ended up with a spicy curry with pork. You helped your self to veggies ( lettuce, cabbage, other smaller leaves) and ate it between bites of your main course to soak up some of the spice.

I started wandering around to kill some time and ended up in the middle of a Cub Scout pack (the kid I talked to the most was 13) and walked and talked with them for 5 blocks until I got to the Mekong. I got to observe the narrowest point in the Mekong in the dry season. I wandered back and when the Nong Khai bus came the tuk tuk drivers and ticket man for the bus told me to get on because it was the Nong Khai bus. The bus was 100b and is making a lot more stops, but my knees don’t touch the seat in front of me, it has AC, and a terrible Thai movie playing. I was hoping for a US movie dubbed in Thai like in Ecuador.

It was another good day and I didn’t see another westerner from the time I woke up until after 6pm. The temple I went to today would be overrun with backpackers if it wasn’t in the middle of nowhere. 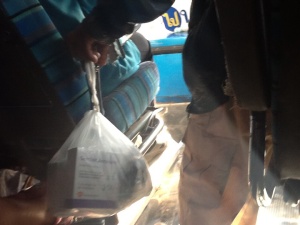 A gentlemen leaving the bus with his Advair