No Brakes, No Problem, Bikes Stop Themselves

Seriously, do I need to buy a jacket? I am in Thailand and I should not be wearing two long sleeve shirts, jeans, and sneakers and still be cold, was my thought when I exited the night train at 8:30am in Nong Khai. I got a solid five hours of sleep followed by four on and off hours because of how cold it was on the train.

Nong Khai is a town situated on the Mekong River, across the river from Laos. There were a lot of backpackers on the train, but most were skipping the town and heading straight for the Friendship Bridge and Laos. My plan was to spend 4 days in an awesome place called Mut Mee which is situated right on the Mekong at the end of the 2+ mile long river walk. 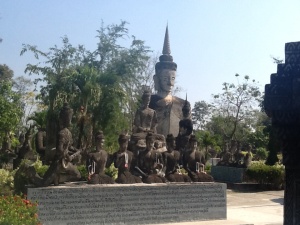 This reminded me of Paul Creme for some odd reason

Yesterday (Thursday), I had the best day by far of my trip (warning, probably a longer blog to reflect the good day). I started with breakfast at a Vietnamese restaurant on the river and got a pot of green to warm me up. I have realized that I really do miss tea and it isn’t related to caffeine. I then checked into Mut Mee and rented a bike for the day. The bike I ended up on was a stoutly geared single speed cruiser, which the left (front) brake had fallen off of. I started out on the river walk and rode my way to the most bizarre place I have visited. It was a sculpture garden made out of concrete by a Lao royalist that was displaced from Laos after the war. The sculptures ranged from 3 feet tall to at least 70 feet, most depicted stories and were spiritual in a nature. The founder said he couldn’t become a monk because he was half animal, half human.

In the templeish building a 78 year old man started talking to me. He was a palm reader, but I only found that out when I asked him why he was there and where he was from. I decided that I should get my palm read and gave him 20 baht (33=$1). This turned into a 20-30 minute conversation about the area and his life. His father was a rice farmer who died when he was 12 and he became an orphan. He worked for the US at Udorn and was never married. They let him sleep in the temple building and on a very good day he might give 2-3 palm readings. He started to learn English 10 years ago from tourists and wanted me to tell him how to say “making a big problem out of a small issue” the best way. He also told me the people in Isaan are friendly, not trying to rip me off like the people in more touristed areas (a fact they pride themselves on). 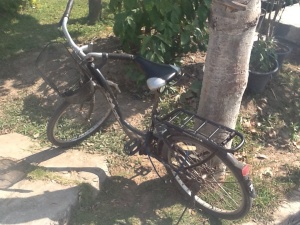 Back to the bike I went and started pedaling in the opposite direction of my map. I shortly realized that it was hard to remember to ride on the left hand side of the road and no matter how many times I tried to pedal backwards, the coaster brake was nonexistent. After probably 10-15 miles I was hungry and pulled up to a house where a women was selling dom, an Isaan soup. There was one woman eating it and I plopped down at the table. Each serving was cooked individually and looked like it had a hunk of beef with bone, meat balls, and an unknown mystery thing (one of the women said moo something and moo is pork so I think it might have been gelatinized pig testicles). When my order was ready there were 4 women waiting and they showed what condiments to put in and it was really good. I got out my Thai/English dictionary and had a mini conversation in Thai. Near the end they called over a younger woman about my age and started to talk about me she started to blush. I think I had some grandmas in rural Thailand try to set me up. I paid my 20 baht and headed back out on my bike, passing an ice cream sandwich stand (read scoops of ice cream put on a slice of white bread with condensed milk added). Heading back into town I discovered that my only working brake had jiggled loose and I was sporting a brakeless bike, but the old shoe on the tire trick (a little tricky with fenders) saved the day. 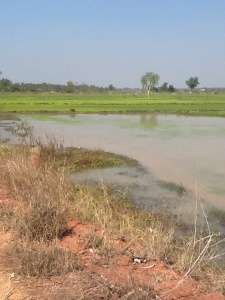 Views of the country side. Most was brown because we are in the dry season right now

I then headed in the opposite direction for 10-15 miles which included a  u-turn over 6 lanes of traffic. I got lost. I ended up on a paddy dike road then path that would have been great single track. Everyone waved and said hello. I missed an opportunity to talk with a farmer who asked where I came from because I was still in the Bangkok mode that people only talked to you when they wanted something from you. I stopped by a stand and bought a whole cut up pineapple, 20b, and had a very stilted conversation with an 11 year old who knew some of the things that you learn in the first month of language school (age, place, name). It was great.

I headed back and avoided having to cross 6 lanes of traffic (only 3). I then ate a fish stew with a ton of aromatics which had a really good flavor on a barge on the Mekong (dinner + beer, 175b, expensive). I talked at the communal table for a bit and headed to bed early around 9/9:30. 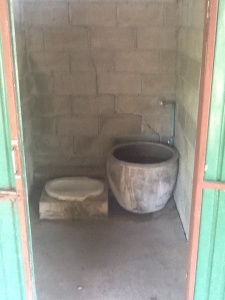