There comes a time traveling when you think who is the bigger fool. They must have thought it was me since I needed instructions on how to turn on my scooter and I thought it was them since they rented a scooter to me for $9, including insurance.  They were out of the smaller engine ones, so they gave me one with a larger engine. Seriously I had no idea what I was doing on the scooter.

I did not go on the Segway tour…

I have come across some interesting wifi passwords. Everyplace has free wifi which is really nice. This place copied the menu 100% of the restaurant across the street

I had a hard time finding a place to stay in Chiang Mai. No one was returning my emails and the places available online didn’t seem too great. I booked at Libra Guesthouse for one night with a plan to find someplace else the following morning. After being whisked from the airport in a 120b (32.85=1usd) tuk tuk, I checked into Libra where nothing was going on and a guy was waiting for me with a key and the internet code. Going into Libra I had low expectations because it appeared that they wrote all their own reviews on trip advisor since most of the reviews had only one post, but had a picture. My room (500b) had a nice hot shower but it was right next to someone’s house and their bathroom so I got to hear everyone in the family take their late night shower. 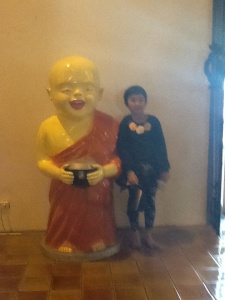 In the morning I started my rounds of trying to find a bet place to stay and ended up at Julie (220b) for two nights. The room wasn’t that great, but there was a really large communal area with a ton of travelers hanging out. I spent the rest of the day sorting out my week, going to temples, and having the first sitting for a suit. I went to Nemrit who is not in the downtown touristy area (which is a little bit of a pain since it involves 4 fittings over 5 days to get the suit made) and he only does westerners for about half of his business (a lot of the suit shops are aimed at just tourists). I also walked around and found a place to spend my last couple nights in town, Smile House (600b, a teak floored building with a balcony and a pool).

Nothing like parking your rusted truck behind the temple 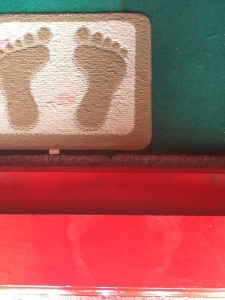 You have to take your shoes off to enter the temples and you are not suppose to step on the thresholds. Someone with dirty feet did…

Tuesday was they day I rented the scooter. I promptly headed out of town into the mountains on a 100km loop. The nice thing is that on the main roads the shoulder is as wide as a normal lane and that is where most of the scooters rode. I also discovered that I am faster downhill on a bike than a scooter and it takes a little practice to feel comfortable driving in town between cars. Tuesday night I ended up going to a fake Muay Thai fight. One of the girls that works in the hostel came with us and if you didn’t know it was fake (looking to see that they kneed with the inside of knees and didn’t really hit to the face) it could have passed as being real. Going home we walked through the girly bar district which consisted of a lot of young Thai women hanging out with old expats.

Please note I refer to the scooter ride as the motorbike rode since it sounds more badass.

Wednesday I decided to do an overnight “trek”. I didn’t really expect great things, but it was a lot of fun. Half the group was 25-30 and the other part was 19 yo Brits. It did involve the most talking of the trip since typically I talk to people at night and in the morning, but not a ton through the day. You could tell a lot of it was made for tourists, but I still had a good time.

When I got back into town on Thursday I had another suit fitting appointment at 6pm and got back at 550pm and had to get my bags from storage at my old place, check into my new place, take a shower, and go 2km. I ended up being 15 minutes late, oh well. It put me out right by Chinatown and I got to experience Chinese New Years which consisted of a ton of food stands and venders and a bunch of happy people. I ended up spending about 900b on street food which consisted of tasting just about everything and eating what I liked.

It has been a good couple of days without a lot of downtime so I really haven’t had a chance to write. I will have a post about the people I have met and the food later. Like always this isn’t edited. 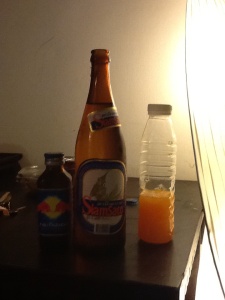 Some Red Bull (10b) and what I thought was shitty beer (32b), turned out to be shitty sweet rice wine

1 Response to Todd+$9=Scooter and No Map