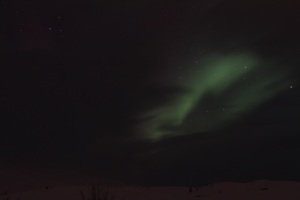 The reason that I am in northern Sweden (farther north than Nome, Alaska) is to see the northern lights. Abiskofalls in the aurora belt (this link will give you all the species about where auroras can be seen and what causes them http://en.m.wikipedia.org/wiki/Aurora) and is located in a rain shadow on a lake where an east-west valley intersects a north-south valley causing clouds to frequently be on the horizon, but the sky over Abisko is clear. 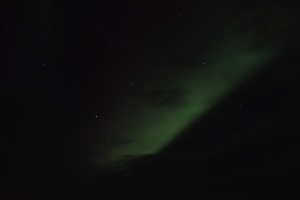 Even though we are in the place to see the aurora borealis, doesn’t mean that it is easy to see (especially if you want any sleep).
Night -1: There was an aurora, but my parents were asleep and I was still in the states
Night 1: aurora with clouds, not the brilliant colors you would expect, a soft glow, came out better in photos than in person
Night 2: clouds, 15km away they saw it
Night 3:clouds
Night 4: a brief aurora across the entire sky with dancing greens and soft reds and purple, moving around, unable to photograph because we were on a chair lift
Night 5: aurora around 6pm, minimal aurora on our “photo tour”, but super clear
Night 6: TBD, cloudy at the moment

Night 7: I can’t tell the future 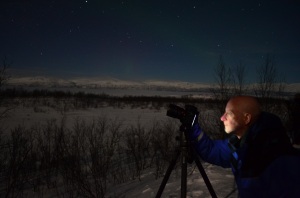 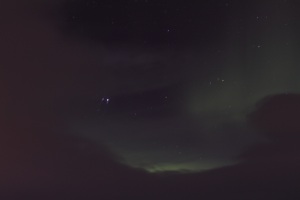 There is still hope for some sweet photographs, but the dancing aurora was awesome and they said it moved quicker than normal. 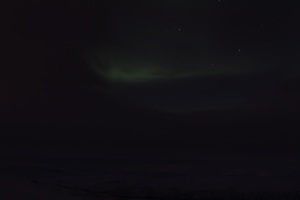 2 Responses to Aurora Borealis in Sweden