Thoughts and Musings on Sweden

When I first arrived in the Stockholm airport the Scandinavian women out numbered the men 3:2 and 1/8 of them were carrying Ortovox airbag backcountry skiing backpacks. I wondered if the entire country was like this, it isn’t.

I know how Thor got giant arms, Nordic skiing. Seriously they rarely use their legs, they just use their arms and they pass me at warp speed. Note to self, never compete in a Nordic skiing event.

Sweden is cheap. Well compared to what I was expecting from Norway it is. Coupled with the strong dollar alcohol is about have the price as in Norway and eating out is maybe 2/3 the price, max.

Alcohol in Sweden must be bought in a “state store”, but a lot of towns don’t have them (Abisko, Bjorkliden). In those towns you can place an order and a few days later your order is delivered to the grocery store. I think the solution to this problem is always having a large supply of alcohol on hand. 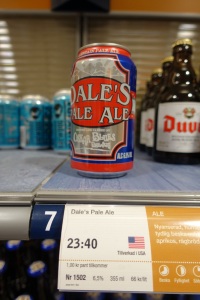 Tourists drive me crazy. I have been feeling like I am tourist while I am here. Where we are staying we were given giant fluffy singlet costumes that are worn for activities. I think it is slightly absurd since I tramp around the mountains of CO on a regular basis and am not cold.

Walking around town you can tell who works/lives in town just by their clothing. Most of the tourists here are here to just see the northern lights and not really the typical winter outdoor type and their clothing/habits make it very clear.

My dad likes his 14 layers of clothes

I was able to have a successful encounter all in Swedish. A man in a store came up to me and asked if I needed help and I replied, no thanks in Swedish. Well that is my version of the encounter. He could have been asking if I wanted a million dollars or if I knew the directions to Kiruna.

Toilet paper. Swedish like it ruff, not the flimsy cheap rough public restroom America style, but well made tuff, sturdy, and rough, comparable to paper towels, just narrower. I am not a fan.

There are a ton on English tourists in northern Sweden and not a ton of American tourists. Abisko had way more Americans than Bjorkliden.

Sweden’s economy is not based off of oil like Norway’s. Sweden does contain the world’s largest iron mine in Kiruna. They are actually going to start mining under the city and there has been some “settling” so their solution is to move some buildings and rebuild the rest of the town in a new location. The project is expected to take about 30 years. Sounds expensive.

I am currently chilling in the Stockholm airport waiting for me flight to Russia. I am slightly nervous, but things will be fine and I have a pretty low key first evening planned: getting a taxi to my hostel.

The rest of this post is about what we did the past couple days, mainly for my memory. I would stop reading now if I were you. The posts on Russia will be WAY better.

Brewed in Sweden, they don’t have Fat Tire, but…

On Wednesday we went and did some ice fishing. Which is basically walking to the late, drill a hole, and jig for 2 hours while getting cold. The guy who runs the trip is fun to talk to at least. We were skunked on fishing.  That night we did a northern light photo trip. The northern lights didn’t reallt come out, but this photo has two streaks faintly in the back. Our guide was really great though, he hated his job. He was a commercial photographer for the UN, mainly spending time in war zones and lately running ordinance disposal projects. He was the person going in with one or two technical analysts and setting up the unexplored bomb removal. He switched to guiding tourists to take the same photo every night when an IED went off 100 yards away from him. He has since decided war zones are safer than tourists and is heading Syria in a couple weeks. He is leading the UN’s unexplored bomb program which has the blessing from Assad. Starting in a couple weeks the UN will have an official presence in Syria,but it will not be published and fly under the radar of the media.

The following day we went on the world’s worse snowmobile tour. We averaged about 15km/hr and it was tedious. It was so bad it was funny. I started to enjoy myself because it amused me that this what people thought snowmobiling was and the people in front of my parents ran their snowmobile into a tree, winning!!!!

Guess who crashed the snowmobile

We then played some Settlers and I lost for the first time during the trip. It clouded over and we were skunked again for the northern lights.

Friday morning we got an early transfer to Kiruna. Kiruna is a mining town with the mining company owning most of the housing. We went on a horse backing riding trip to see moose on Icelandic horses. It was awesome, we were trotting through the snow, saw 30+ moose and overall I had a great time. The people running the program were Sami, the indigenous people of northern Norway/Sweden/Russia, but there operation was pure commercial. The lunch was reindeer, but not a lot of effort went into it.  That evening my mom and I wandered around Kiruna and went to the liquor store.  It was awesome.  I was a kid in a candy store. 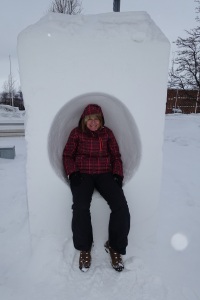 In a park in Kiruna

My trip to Sweden was great  I had a great time with my parents and am now off to Russia.

Like Loading...
This entry was posted in Uncategorized and tagged abisko, and an overgrowth of weeds (not the golden rod that covers the countryside). It took a walk of about 250 meters to discover the old town and why I came here. I so far have found the food to be very me, assad, backpacking, horseback riding, kiuna, northern lights, Sweden, swedish beet, un in syria. Bookmark the permalink.