Russia is cloudy and cold in early March!!

Wow, I have been here two full days. Where to start, my Russian still sucks. I learned that in December St Petersburg got 3 hours of sun all month according to the official weather people (they round up). That explains why it has been cloudy the entire time I have been here. Today I was cold, probably because of the wind combined with my lack of clothing. 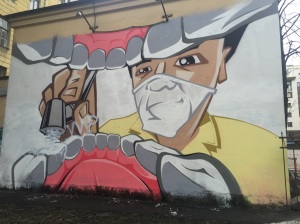 This was random street art

Every place you go in has a coat room where you deposit your jacket. It means that I have to stuff my passport, wallet, cell phone, and camera into each of my pants pockets.

Sunday morning I had a leisurely morning and was able to find a place open to grab breakfast, a pastry and hot chocolate (read thick gooey chocolate goodness that I could live on). I ended up in the cafe at the old Singer sewing machine factory that still has its original decor. I went to the Russian Museum which surprisingly just had Russian art. The art museums are held in giant palaces that seem to be way to big for any practical purpose. 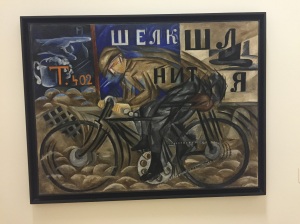 I then left for a splurge on my trip, the Sunday jazz brunch at the Hotel Europe. The Hotel Europe was one of the main places the aristocracy went. It was pretty over the top: a jazz quartet, an man rolling a cart with Peking duck (he was Asain and SPB is less diverse than Boulder, I have seen one black person), unlimited champagne (vodka and wine too), lots of fish, lamb, homemade chocolates, a chocolate fountain, a waiter that came with horseradish because it went well with one of my fish, herring (still tastes like crap). It was pretty crazy and good for a one time visit. 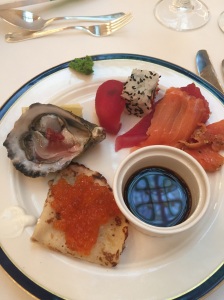 They fired the artillery piece on the wall, it was a blank, but it was really loud and made a ton of smoke 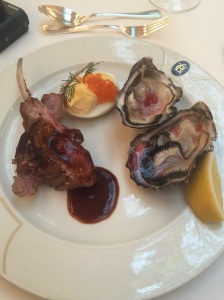 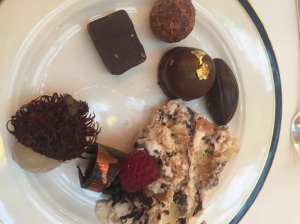 I then went to another museum associated with the Russian Museum and then I headed to a metro station to meet up with Leisan. I had got ahold of her on couchsurfing.com, not to spend the night, but to hangout. Well out hanging out consisted of 3 bars, Russian craft beer, drinking from 5-1230, and forgetting about dinner. She is an engineer (like America 80% of engineers are men) has travelled a ton and just got back from a six month trip. I learned a ton and had a blast and got back to the hostel slightly intoxicated and ate a snickers bar. 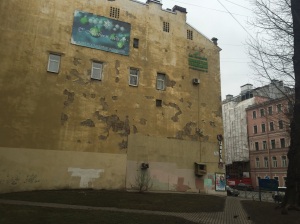 Most of SPB in the city center has a nice front, but work is needed everywhere

Monday I was planning on going to Novgorod a city 3 hours away with a guide, but he was sick so I went to plan B. Plan B became Plan C when I discovered that even though I told my credit card I was going to Russia they blocked, but I decided not to worry about and I would figure it out that night, but I had 300r (62r=$1) in small bills and a 5000r bill, try spending an $80 bill, it is hard (6 months ago it would have been a $150 bill and still is to Russians). I used my backup credit card and got some more cash and went to Peter and Paul’s fortress and then to the Museum of Political History which is one of the most well done ones I have ever been to and went from 1850 to 2000. 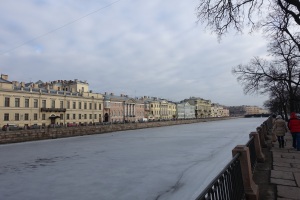 To get to the museums which are on an island I had to take the subway which is deep underground (read 2+ minutes escalator ride, recommended to make out with people on them apparently). I was starving by that point and went to a kiosk selling pancakes and pointed to what the women in front of me got. It was like a ham and cheese Russian pancake (yummy). After the history museum I was super hungry. When I get hungry I can’t make choices. I ended up in a cafe that just had a menu in Cyrillic on a board. I left. I ended up at a place where I paid 150r for lunch. I then went back to the subway and on the way grabbed a chocolate filled pastry for 45r. Well it turns out I bought a hotdog filled pastry which was a very unpleasant surprise on the first bite and reminded me of the curry paste filled donut I had expecting a cream filled one in Japan. 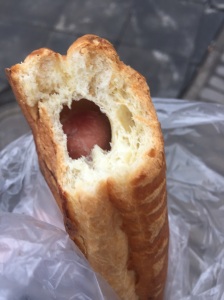 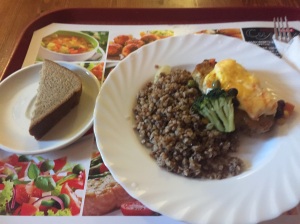 Lunch that I found while starving 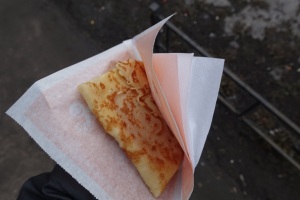 SPB has a ton of free wifi so I was able to coordinate meeting up with Natalya at 7pm at a metro station on a different island. I then went to a church and back to the hostel. I downloaded Google Hangouts and called my credit card for free and got things straightened out. I then met Natalya and realized I had no idea what she looked like, but I did tell her I was 190cm and my jacket had a red zipper and she found me. We went and had Georgian food which was great. 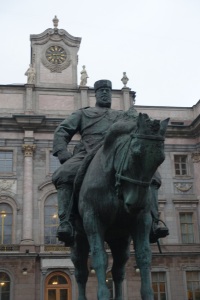 I made it back to the hostel around 1030/11 and shortly after fell asleep. These blog posts are actually being written on my phone, while in line, at meals, on the metro, so they might be disjointed.