Gold leaf is nor UN short supply in St Petersburg

Tuesday was an art day. I have now had my fill of art museums for at least the rest of the month. I started by heading off to the Hermitage. The Hermitage is a giant museum that was once the Tsar’s main residence. It contains works by DaVinci, Raphael, Monet, Rembrandt, Picasso, ect. A lot of the works were acquired before 1900, but a lot of the French paintings were looted during WWII. It also contains two treasure rooms, a diamond and gold room. They do a good job nickel and diming you: admission 400r (62r=$1), photos 200r, coat room free, each treasure room 300r, audio guide 450r. Of course I went to the gold treasure room and I was little disappointed because the 10 year old in me was expected just mounds of gold, but no they put the impressive 2000 year old gold artifacts in cases. 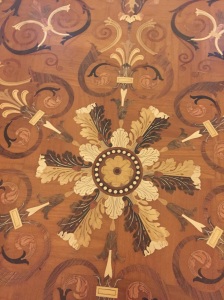 Lots of impressive floors at the hermitage

A lot of coats for being the small one…

I left the Hermitage at 330 and if you can detect a theme I had not had lunch yet so I started to walk to St Isaac’s Cathedral looking for a store to buy a snack and water in since it was so late. It started to rain and I failed at my food quest so I went straight to the cathedral. After the cathedral I went back to the hostel, had a few pretzels, failed at buying hockey tickets, and made last minute plans to hangout with a Russian hipster (like meet a 15 minute walk away in 20 minutes). There was a slight snafu in our meeting location and neither one of us had data on our phone so it took a little bit to find each other. We walked around town for a bit and then grabbed some ginger tea.

At this point I was pretty hungry and walked into a restaurant without an English menu and the people just looked at me and I decided I wasn’t in the mood for the point and pray method of ordering door so I did an ungrateful uturn and headed to a semi expensive Georgian place and had sharp cheese filled dumplings and dumpling soup and a beer (1200r). 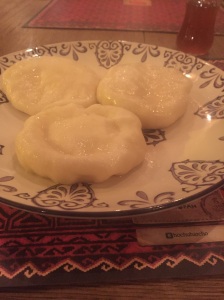 Cheese goodness, not meant for one, oh well

I then went to the grocery store and bought some Russian ho-hos/Swiss rolls. The Russians put chocolate filling in their version, but I wasn’t able to read the ingredients to see if they put glycol in them too.

Wednesday morning I cheated and arranged for a guide, Roman, to take me to Novgorod a city founded ~1000AD. We were suppose to go Monday, but he rescheduled because he was sick. The day before he asked if his girlfriend, also a guide could come along. We left at 830am and got back at 730pm. The city was interesting, but it decided to rain for real while we were there. The churches we visited were all painted inside with some of the frescos being hundreds of years old. Roman was full of historical facts and his girlfriend was more of a free spirits who’s English was not as good. We talked probably five out of the six hours in the car. We saw the real Russia from ramshackle wooden houses to five story apartment buildings (Gorbachev era, cheapest to build) to the later nine story buildings.

I then came back and went out for dinner. I wanted to get Russian food at a new place, but the other places had no one in them so I settled back at my place I had dinner the first night and had borsch and potato pancakes with mushrooms. When I came back some people asked if I wanted to go drinking, I am old, so I said no and I had not had a free evening (read free after 9pm) since I have been here and needed to figure a couple things out.

Ice fishing on the Neva River

I am going to write a post on the people I have talked to and about Russians a little later.