We did not get lost in Slovenia, yet

Vienna from the junior penthouse 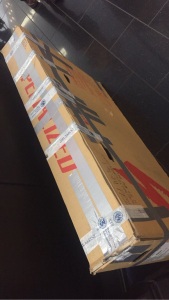 Bike box re packed by TSA

I am in Slovenia, 6km outside Slovenj Gradec, about 1-2km up a damn step hill. The only reason the steep hill matters is because I am with my buddy Chris Wehrly riding bikes. I have also discovered that in the past traveling alone and using public transit there is a lot more time to write blogs. 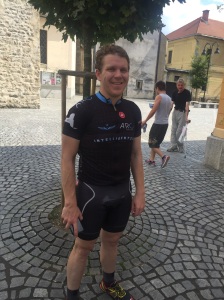 f at the airport at 515am the next morning with my bike in a lovely box. I would have put a lot less tape on the box if I knew TSA was going to open it, but it arrived unharmed in Vienna (thanks to Paul Creme’s packing tips. Chris and I then built up our bikes in the airport and made a detour to the Trek store to purchase some much needed peddles… We then checked into the Bristol Hotel and got upgraded to a junior penthouse (they stored our bikes in the hallway next to the kitchen, can’t have bikes in a 550€ hotel room).

The next morning we caught the 8am train to Maribor, the second largest city in Slovenia (80K people). We discovered that the grocery store closes at 3pm on Sunday and even though it looks like it is going to rain it doesn’t always rain. We ended up staying with Jesna and her roommate Dan which we connect with via Couchsurfing. We grabbed dinner together and talked a ton. It was petty interesting that Slovenia hasn’t been a country very long and a lot of their cultures and traditions are regional and not really based off a country boundary. We got home about 10 minutes before it started dumping out which was great. 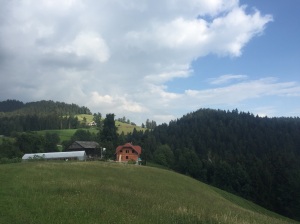 When I woke up the next morning it was still raining, we slept out the rain and got up at 830 and started cycling around 1015. We picked a realitivily flat path with 4-5k feet of elevation gain over 52ish miles that followed an established cycling trail near a river for the first 2/3 then we cut south towards Slovenj Gradec. After riding bikes for a few hours we stopped for some coffee, lunch, and a beer.  In Slovenj Gradec we stopped in the tourist information center which is run by the government and they give you like 9 ounces of maps and information each time you stop in. It is a little much since we are on bikes so I make Chris carry it all. I was joking that the tourist farm we are staying at was at the top of a hill and it turns out that I was pretty right and it sure was a steep one. They have cows, pigs, a greenhouse, make their own flour, ect. 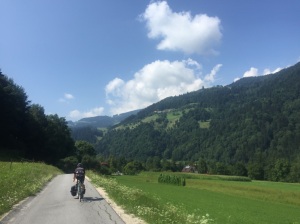 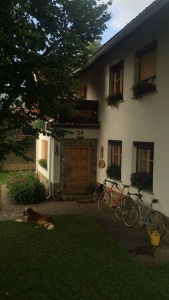 So so far the trip has been awesome and our next day riding is basically all uphill….

1 Response to We did not get lost in Slovenia, yet