Russia is a County of Possibilities, Everything is Possible 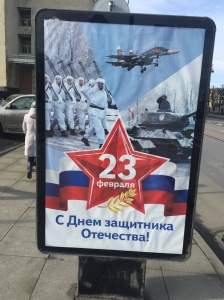 I have no idea what this sign is for, but 23 years of something looks like it is related to Soviet times

Russia is a country of possibilities, everything is possible is what Roman told me in the car and it kind of fits. It alludes to the fact that people in Russia can change their socioeconomic status and to the fact that money can make things not normally allowed possible. I had a great trip overall and I really enjoyed St Petersburg. Some Russian stereotypes proved to be true, others not so much.  The rest of this post is going to basically be my thoughts on St Petersburg and Russia in general. I was able to meet up with four Russians through couchsurfing.com in the evenings to hangout and I also spent a good amount of time talking to my tour guide and his girlfriend. Below is a brief description of each person I hung out with and what I am going to refer to them as to avoid typing their names 30 times. 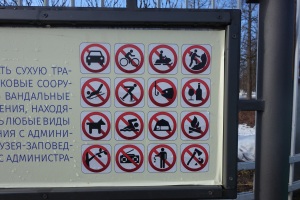 You are not allowed to have any fun in this park

Leisan(L): female engineer, travels a bunch, speaks perfect English, 31ish, from Siberia. I was the first American that she met that had a real job.
Natalya(N): 26yo linguistics PhD candidate, tutors English, from Siberia, vegetarian, used to be vegan. Very proper.
Katya(K): 24yo English teacher, went to the most liberal university in Russia, spent a year at the University of Tennessee, walked across Mississippi in two months, Russian Hipster
Roman (R): 25yo, tour guide like, interrupts, isn’t wrong, knows his stuff, likes facts, from SPB
Larissa (LA): Roman’s girlfriend, teaches accounting, also a guide, would fit in in Boulder, free spirit, wants to talk about America.
Eva (E): 26ish yo, used to work in facilities management now works as a producer for educational videos
Appearance of Russians: the movies made me expect all men over the age of 40 to be overweight and that was not the case, Russian men overall were more fit then depicted in movies. I was surprised that I found The average Russian women in SPB more attractive then the average Swedish women, but Swedish women were definitely more physically active.

There was what I would consider fashionable dress, lots of boots and scarves. I also live in Boulder so that statement doesn’t mean a lot.

Russian language: I was expecting the language to be a very “hard” sounding language like German, but most everyday conversations were generally soft and pleasing to the ear.
SPB only got 3 hours of sun (when clouds weren’t covering the sun, not when it wasn’t night out) in December.

The architecture of the historical center is very 19th century European, but interspersed are soviet style buildings, mainly replacing buildings destroyed by the siege of Leningrad, not ones knocked down to be rebuilt in the soviet style (which happened in some areas of Moscow). Driving out of the city I saw your stereotypical areas that had 5-15 soviet style apartment buildings clustered around each other which R says appear in every Russian city. SPB bloomed from 1 million to over 3 million people before WWll and there wasn’t enough housing so the kommunalka became popular where basically a family would have one room and then there would be a shared kitchen and bathroom. The Soviets counted over 600 palaces/mansions in the city when they took over and turned a bunch of them in kommunalka.

During the 50s and 60s Gorbachev started building 5 story apartment buildings (they were the cheapest) and then in the 70s the nine story buildings become more popular.  Once the Soviet Union collapsed you could then assume ownership of where you were living for a small registration fee.  This means that just about everything built before 1992 consists of individual condos and not managed as apartment buildings.

Toilets in Russia typically cost 20r (62r=$1) to use, resulting in me always using them in museums before I left, just in case.

Pay for use Porta-Pots

I thought that there would be a lot more smoking in Russia than there was.  A pack of cigarettes costs ~60r, but not a lot of people smoked.  Eva said that a decade or two ago Russians were on the verge of smoking and drinking themselves to death and there is a movement to be healthy and exercise.  A cheap bottle of vodka still costs 120r, but most people were buying the 300r bottles that I noticed.

This is an awesome amount of beets!!! I guess borsch requires a lot

The feeling on what they called “crisis” varied. R and LA viewed that Crimea and eastern Ukraine are really Russians that became part of Ukraine only when the borders were drawn. L was a little irritated that Crimea is now part of Russia just because now Russia has to support it and wouldn’t every poor country want to become part of a rich one. Ukraine has cut off trading, water, and power to Crimea and since Crimea does not border all the supplies have to go by ferry and barge and during the winter the Black Sea is not the calmest body of water. Overall they consider it a war and do not deny that Russians are fighting there.
While I was in SPB Boris Nemtsov was assassinated in Moscow.  It caught international headlines, but no one in SPB mentioned it or talked about.  It was like it didn’t happen and I did not see anything about it on TV (not that I saw a lot of TV).
It was interesting the different opinions of the media.  L’s parents live in rural Siberia and are pensioners that spend a lot of time watching state sponsored TV and believe they know exactly what it going on in the world.  N believes that the Russian press is free to publish what they want and does not distort the truth.  A couple people did not follow the news at all.

I think sign wants you to use car seats

Since the ruble has collapsed there are varying opinions on the prices of things. N says that things in the grocery store are more expensive and her favorite food that she used to mainly eat is now three times the price. K doesn’t really notice a price increase. L thinks that food is slightly more expensive, but the prices in the bars and restaurants have stayed the same, the owners absorbing the cost increases.

The subway in SPB is really easy to use and has some pretty great architecture.  The subway is really deep underground, with the deepest station being over 275 feet deep.  What it means is that there are really long escalators that take up to five minutes.

The most boring job ever, watching the escalators. There are video cameras on them to keep down the tomfoolery

The hostel I stayed in was Soul Kitchen and it was by far the best hostel that I had stayed in.  I was in an eight bed dorm, but the first two nights I was the only one in it, and the next 3 nights there were only two other people in it.  It was situated on the second floor in an old row house on a canal.

Landing outside the hostel

Overall the trip to Russia was great and my visa is still valid for three more years.