Casablanca, that is in Morocco

A fishing boat at the port in Casablance

The adventure to Morocco has begun. It actually started with me having Friday off which necessitated a back country ski tour of the Brainard Lake area before heading to Northern Africa.

Our trip to Casablanca began with a 6 hour layover in Philly where my parents met us and we were able to grab some lunch at Dock Street Brewing. The plane ride was only 7ish hours so after I watched my movie and Katy cried during her Disney movie I took a 4-6 hour sleeping medicine and it turns out only had 3.5ish hours to sleep since the plane ride wasn’t the 8.5 hours advertised. Needless to say I was groggy to the max eating breakfast (read almost fell asleep while drinking tea). Katy wasn’t feeling too hot when we arrived in Madrid and some Tylenol and Zofran later started to feel better once we reached Casablanca.

Petit taxis, used intercity our rides have been $1-$3, they all should have been less than $2…

Our introduction to Morocco was punctuated by a scuffle in the line for immigration. We had a very uneventful cab ride downtown and then went off exploring. We visited the King Hassan II mosque which was just built ~20 years ago and is the third largest in the world (can fit 25k inside). Most mosques non-Muslims are not allowed in, but this one had a tour which we took. We then walked along the seaside before taking a taxi back to the Sheraton and freshening up.

We took a stroll through the medina (walled city) and were told by two Moroccans who live in Amsterdam to eat these donuts there were eating. We continued walked to the port, through the security gate, and onto the docks where the fishing boats were cleaning up after a day out. We resisted the temptation to buy a load of fish and went to a busy fish restaurant. I discovered that Katy had never had peel and eat shrimp before. 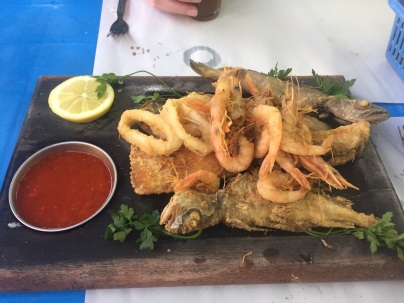 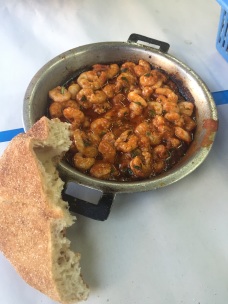 After dinner we stopped by and had some donuts before taking a taxi to Rick’s Cafe which is based off the one in the movie (Katy really wanted to go). After almost falling asleep while having a drink at Rick’s we took a taxi back to the Sheraton where the taxi driver screwed with meter and the ride cost $3.10 instead of $1. We then fell asleep at 8pm. I was so tired that I didn’t take a sleeping med and after 11pm I woke up on a regular basis (Katy had no such problem with her resident sleep cycle). The benefit was that I was able to get updates on the Super Bowl and see that the Broncos won!!!! 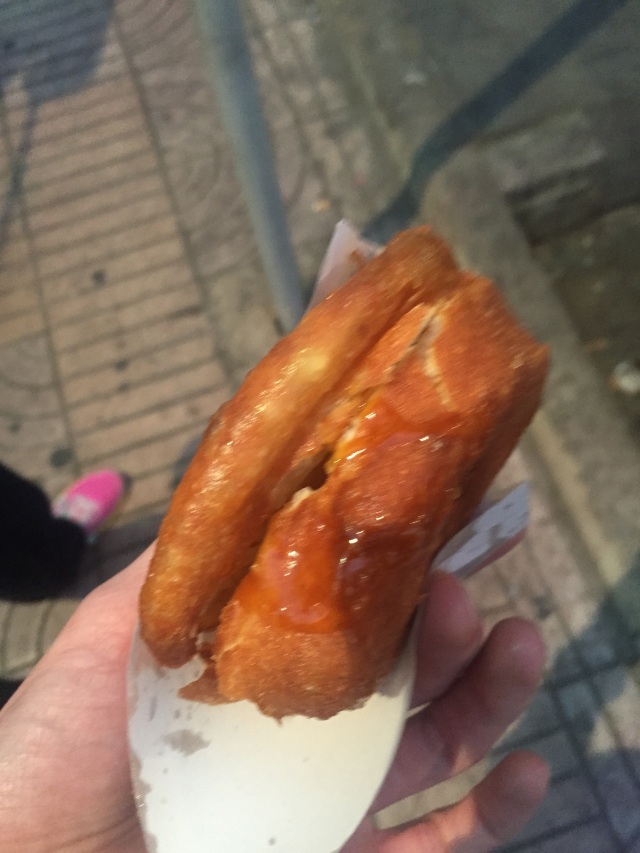 Donut with marmalade inside

I am having a bear of a time uploading photos so posts have been delayed because they are pointless without pictures.

1 Response to Casablanca, that is in Morocco