I Can Pronounce LJUBLJANA

This post will conclude the events in the Slovenia trip and will be followed up by a thoughts post.  Half of it was written on the plane and the other half a week after getting back so it will be disjointed like normal!!!

Wednesday morning I woke up and my tummy wasn’t super happy with me. We had a short (20m, 3000k ft elevation) day in store.  We first rode to Pradjama Castle which is a castle built into the side of a cliff at the entrance to a cave. A robin hood (depending on your opinion) owner of the castle stayed there for a year while under siege and used a secret entrance via the caves for supplies. The castle and audio tour were actually more interesting than normal. At the castle we could tell we were on the Slovenian “tourist trail”.  We saw a couple other cyclotourers including a break apart tandem. 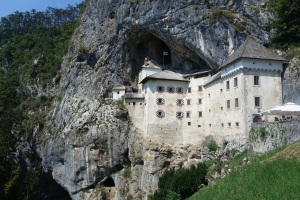 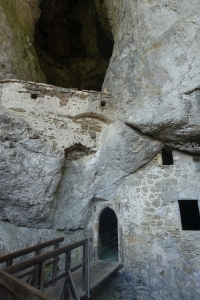 We then went to Postonjana Caves which is a large cave system and had a tour. It involved a train ride a couple of kilometers into the cave and about an hour walking around. It had been a really hot day and when we exited the cave some clouds had rolled in which was pretty awesome. We have been informed that we are in the third heat wave of the summer. All I know is that it is super hot.

The cave was actually pretty cool

I am not sure what this sign meant, but I tried to emulate it

Chris hanging out in a museum

We walked around town and failed to find a grocery store after seeing a sign for one in 400 meters. Chris picked where to eat via the Internet and we had a really good meal including our first craft beer. My eating is still screwed up so I wasn’t hungry, but managed to still eat.

The next morning we had breakfast and started our ride into Ljubliana, our last destination in Slovenia. I felt a lot better cycling than the last two days and Chris and I ended up in Ljubljana a few hours ahead of our estimated time. When we stopped for our mid ride machiatto it was served with a mini beignet by a women who had been to Lakewood, CO racing motocross. I wanted an entire plate of the beignets, but figured that it would be way too much coffee if it ones one per beignet…

When we got to town we realized we didn’t do as much elevation as we had planned so we ride to the top of the hill in town which housed the castle. The castle was pretty cool, but had really been outfitted with a lot of modern structures to facilitate separating tourists from their money.  At this point Chris was getting pretty hungry and my stomach was still in the never hungry mode. We grabbed some lunch at a spot just off of the open air market. Ljubljana has an old town area with old buildings and cobblestone streets, most of it is closed to cars. It has a bunch of shops and restaurants and is a pretty nice city. A couple months I hosted a couch surfer, Ana, from Ljubljana who goes to college in Iowa and  Chris and I stayed with her and her mom for a couple days. 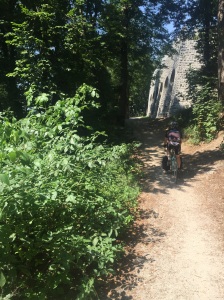 Riding up to the castle 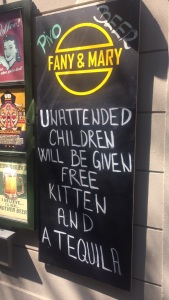 It was great to have other people to talk to and they were a really interesting family. Ana’s mom, Nada, has done 23 Ironman and her father was the first Slovenian to summit Everest without oxygen.  We went on a bike ride with them and spent a couple evenings talking to them and their friends.  It was one of those experiences that makes traveling worth while and that you don’t get if you stay in a hostel and just talk to other travelers.  Also they had internet that was like 7.3 times faster than the next fastest we had (Grandma Cuder was fresh out of internet) which probably made them think we spent way more time on the internet on average than we did the rest of the trip. 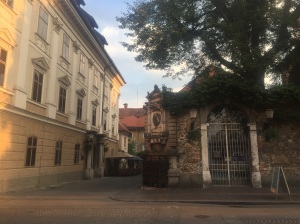 When we went back downtown the first night we went to a craft beer bar and I can safely say that Slovenian craft beer is not very good compared to Boulder’s, but it was a nice break from all the wine we had been drinking.  We had a hard time picking dinner (read I had a hard time picking dinner), it was the first meal in a long time I was actually hungry for, but couldn’t make up my mind where to go.  The place we (I) decided on was lackluster, but it happens. 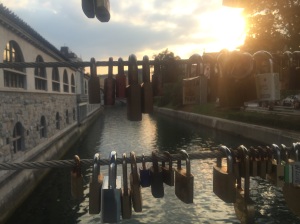 The following day we went for a bike ride with Ana and Nada and then back downtown.  We sorted out our train ticked and somehow for $72 we got two tickets to Vienna with bikes.  Half the distance on the way to Maribor on the same train cost $160+. The ticket lady seemed like she enjoyed her job (dealing with foreigners getting international train tickets) and really hooked us up. We then went and had a way better meal than the first night. 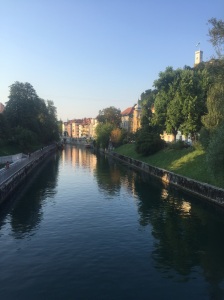 Our last day in Slovenia Chris and I went on a casual bike ride, packed everything up and took the 6 hour train to Vienna.  We grabbed about $15 work of beer and groceries (read meat and cheese) to make it through the train ride which we didn’t have anyone sitting next to us except for the last couple of hours. 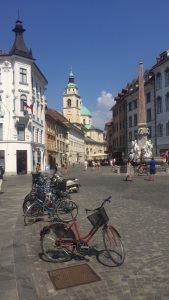 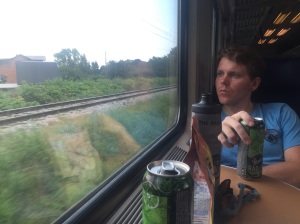 We then rolled in the the Le Meridian around 11pm and they wanted us to park our bikes outside, we weren’t having it so we ended up with our bikes in a back hallway, at least they weren’t in the kitchen like at the Bristol.  We then went to conquer the free minibar and found it was free because it was super lame.

Look closely, we found this really out of place in a palace

The following day was our last day of the trip and we were planning on grabbing bike boxes and seeing Vienna for a day.  I wanted a more full day of seeing Vienna than Chris so I set off early and he met me an hour or two later.  We saw a lot of impressive old buildings and clothes and jewels and swords and unicorn horns and other assorted items that were worth a lot of money. 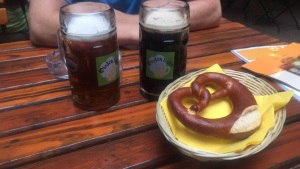 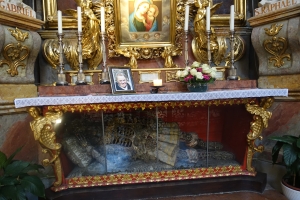 When we went to grab out bicycle boxes from the store that was holding them for us they were closed.  We then realized it was a national holiday so everything was closed (calling 5 other bike stores confirmed this).  We then decided on buying the really expensive bike boxes at 530am at the airport and packing there.  It was going to be a slightly stressful morning, but we had a full roll of duck tape imported from the US.  We got the 445am train to the airport and found out the bike boxes were huge and shitty.  We did pack them up and went to check them (I was taking both the bikes since Chris was traveling longer) and were met by some not so happy to see us British Airline contract employees.  They decided to let us check the boxes and only charged us $85 for the second, not the $150 they were suppose to (mine was free).  When I got to customs in Philly after a layover in Heathrow the bikes didn’t show up which was a relief because it meant I didn’t have to manhandle two bikes.  They also didn’t show up in Denver, WIN.  I think I was one of the few people that thanked American for losing my luggage so I didn’t have to transport it home.

How my bike box arrived home, no bottom. Bikes were in great shape!!!

1 Response to I Can Pronounce LJUBLJANA