Buying donkeys for $100 in Morocco 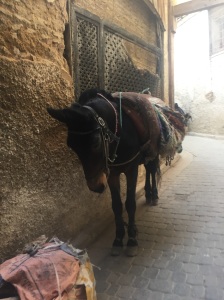 Thankfully Katy was not interested in a mule, they are used to carry goods through the medina

Thankfully Katy resisted the urge to buy a donkey for $100, the going rate. She said it would go very well with the yaks she sees in the future and would fit as a carry on…

The outer wall of the medina

Before Katy had a chance to reconsider we left Moulay Idress with the intent of ending up in Fes. The journey included a grand taxi back to Meknes and a train to Fes. We were high rollers again and booked the entire taxi this time for $9, but ending at the train station. It was worth the extra dollars since last time we couldn’t find an empty taxi in Meknes and that taxi would have been $2ish anyways. Katy has started to get more assertive in her French and I have learned to explain in more detail what should be said (like there are 2 train stations and we want the main one).

In the medina there are a lot of fountains. Some are restored and some are stilled used by the community for water

We set out in Fes to find our way to our riad which is located in the center of the medina. I assumed that we would fail and we did. We had to enlist the help of one of the innumerable men insisting that you didn’t know where you were going and wanting to show you the way. 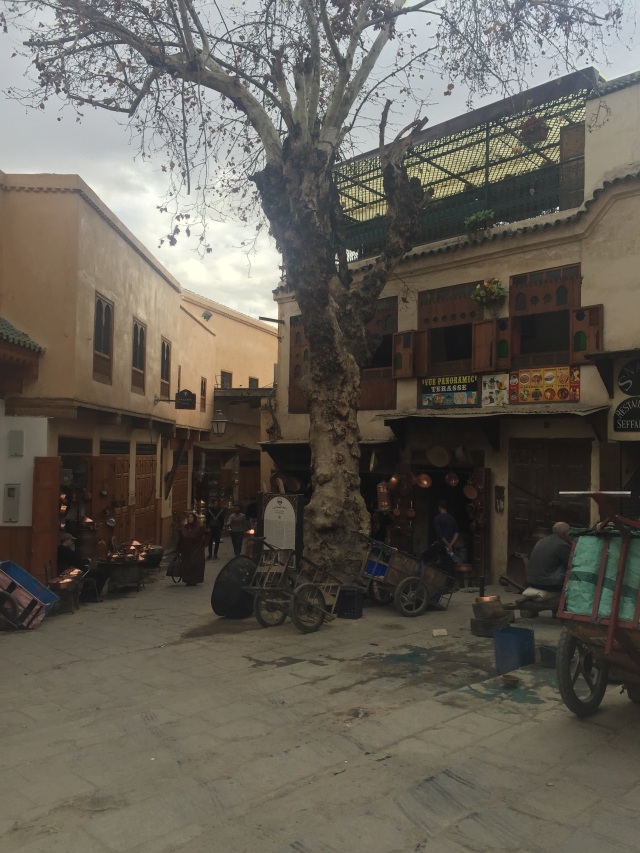 We stayed in Riad Bensouda which is a pretty large riad with 18 beds, but is a really well redone palace. After we got settled we headed out for some exploring and getting lost in the medina. The Fes medina is way more complicated than the other ones that he have been in and after two days of wandering I was able to have a decent sense on how to get home. I did cheat though, I found a restaurant with signs pointing to it on either side of the medina and used that the signs to get to the restaurants and from there I knew the way back. Katy on the other hand was content with walking by the same intersection 4 different times because it was all new each time for her. 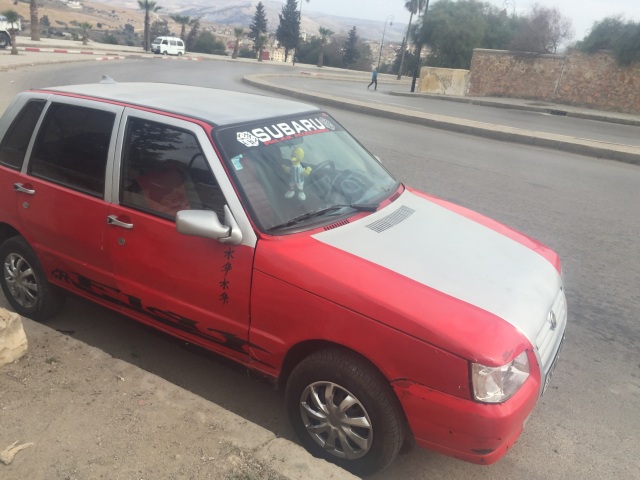 Not a Subaru… Very few American or Japanese cars

Walking through the medina was sensory overload at times. There were a lot of smells depending on where in the medina you were ranging from pigeon poop (used to treat the leather during processing for the ammonia, 2.2lbs goes for $6 and people collect it from all the balcony and roofs in town) to meat to spices to cooking. Along with the smells there is constant activity and people going too and fro. 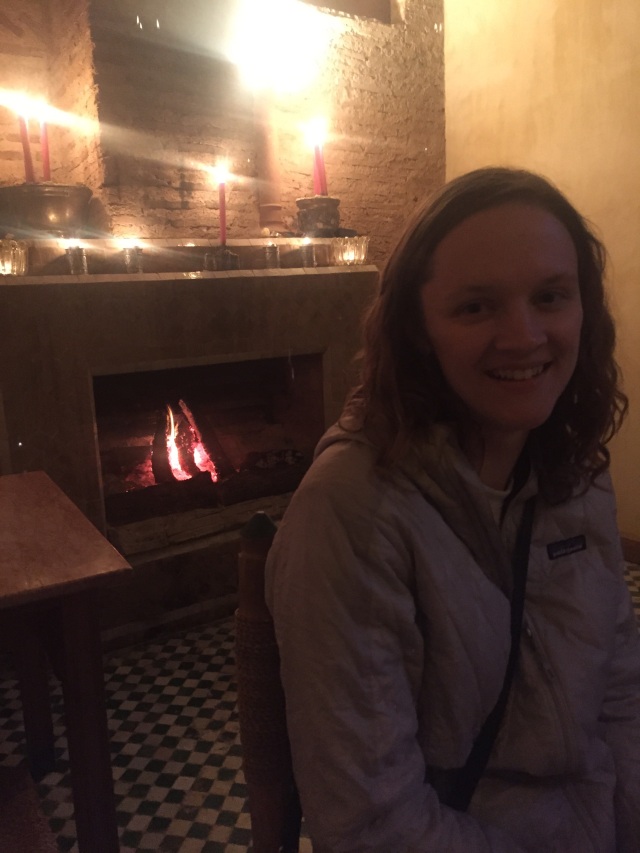 Eating dinner by a fireplace. The weather is such that it is a decent temperature during the day but gets cold at night. The buildings are made for heat so most of the seating is open and staying warm at night usually involves extra layers 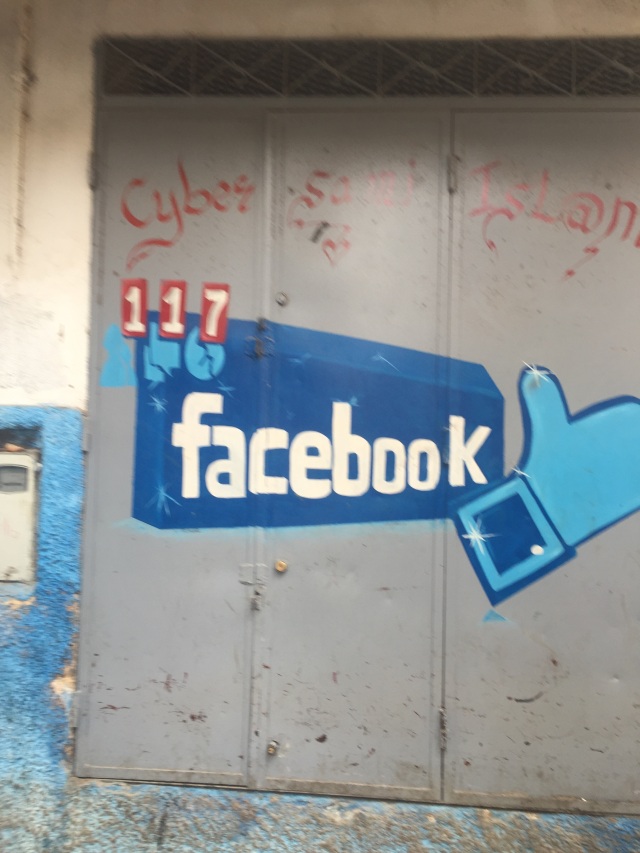 The medina is about 1200 years old and obviously being that old things are in a state of decay. If you tore down a couple buildings in the center the rest of the city might reverse domino and fall down since I think all the structures are supporting their neighbors. You really have no idea what a stricture looks like inside from the outside (our riad looked like a normal building).

During our 2.5 days in Fes we did a lot of walking around the medina punctuated by mint tea/coffee/fresh squeezed juice breaks. While all the merchants are set up the streets feel crowded and constricted, but when we wondered around on Friday, the Islamic day of prayer, when a lot of shops were closed they felt much wider and it was possible to walk two abreast at times. 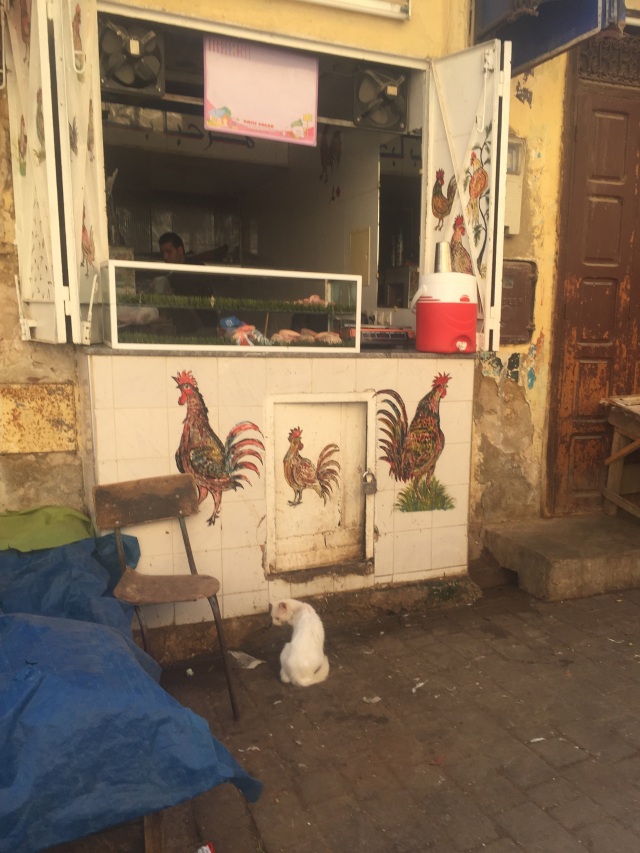 Want to buy chicken? There are a ton of feral cats running around the city, but no rats that we could see.

Compared to the other places we have been there were not a lot of western tourists, but compared to high season, spring, or even a few weeks there weren’t a lot.

Our stash of honey and assorted nut

This is a miss mashed post written over several days. Our next step of the adventure is going to the desert. We are having a great time.  The Internet has been pretty spotty and I haven’t been able to upload photos from my camera in the past couple of days. 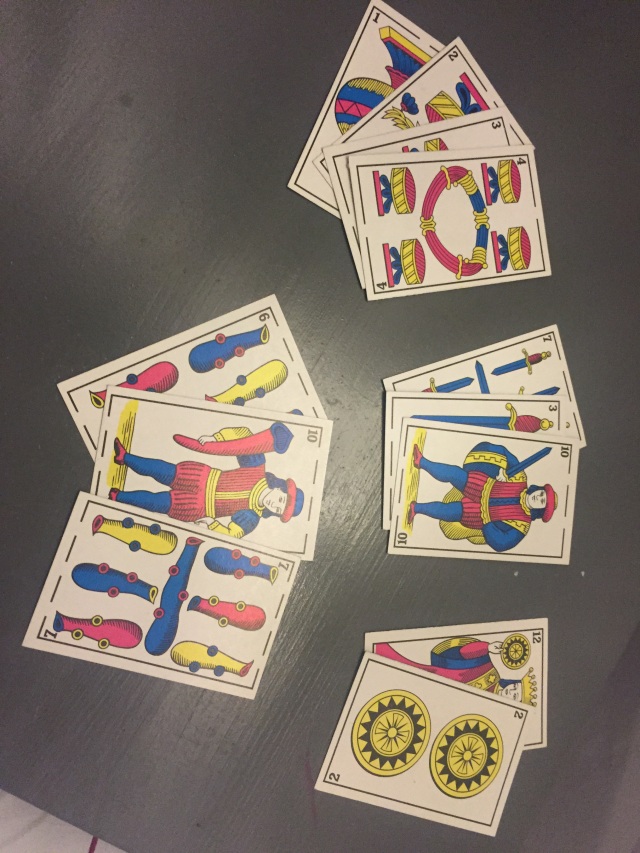 Our replacement playing cards. We thought it was a 48 card deck 1-13, but after playing discovered there were no 8s or 9s…. Also the suits are mutant eggplants, cushions, swords, and coins