I am currently in Taipei. This might have been my most last minute trip so far. It started by randomly looking online for a long weekend I had coming up in a week to see if their were any cheap award seats to Japan on United and there were, but they were 80k miles each way. I then remembered that All Nippon Airlines costs way less roundtrip, 85k miles, and checked if there was availability and there was. I tried to see if I could convince any family to take a trip with me and was systematically declined. I then told Katy what I was doing and she urged me to take a long weekend trip. I then opened up the flood gates and discovered that I could leave after work on Wednesday and get to Taipei at 530am on Friday and then leave Taipei at 730pm on Monday and get home at 920pm on Monday for 95k miles + $132. I decided to pull the trigger and that is how I ended up flying EVA Air from San Francisco to Taipei.

I like the free flowing $150/bottle champagne, but I am afraid that it is a little lost on me. The $200/bottle scotch was not.

The benefit of booking via ANA is that for 95k miles I am flying in the front of the plane (United charges 80k for the same flight in coach). When I boarded the plane I was addressed by name and offered beverages which I partook in some $150 per bottle champagne. They then handed me my pajamas, amenity kit, and about six menus. They came back and confirmed that I pre ordered my meals and what I wanted to drink with my dinner and breakfast. Keep in mind it is 210am in Denver at this time, but a late dinner isn’t the worse thing ever. Dinner consisted of 4 courses with the main course being lamb and everything was surprisingly good. After dinner I switched into the pajamas and let me tell you, wearing pjs is the best way to fly, although they come in sizes made for Taiwanese so the sleeves were a touch short… 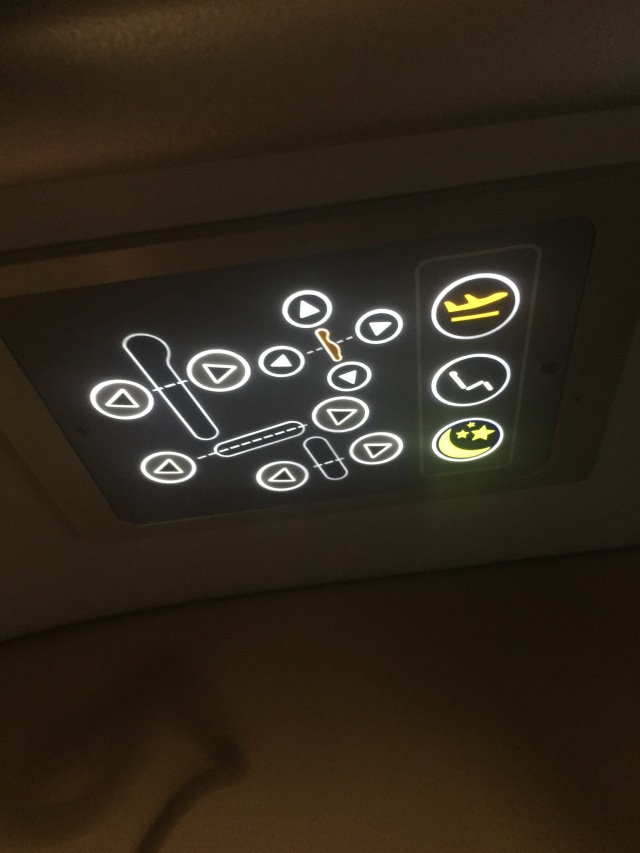 The seat was more complicated to operate than I imagined. You

I have ended getting about 7 hours of sleep in my pod before I woke up and read the guidebook to figure out exactly what I was going to do in Taipei for the next 4 days. I went for the Chinese option for breakfast and ended up with a giant plater of assorted foods. I abstained from alcohol with breakfast, but did have a cappuccino and espresso. The last time I was in Asia with Katy I had a terrible time adjusting to the time zones and am trying to be proactive and fortify myself with caffeine.

We landed at 530am Friday morning (14 hours ahead of MST) and by 730am I was on the train with a wifi egg (unlimited data and $8 total for 4 days), a metro/bus card (like the Oyster card in London, you preload it with money) and three crisp 1000 New Taiwan Dollars (I hate just getting large bills, $30=1USD) after the third ATM I tried accepted my card. 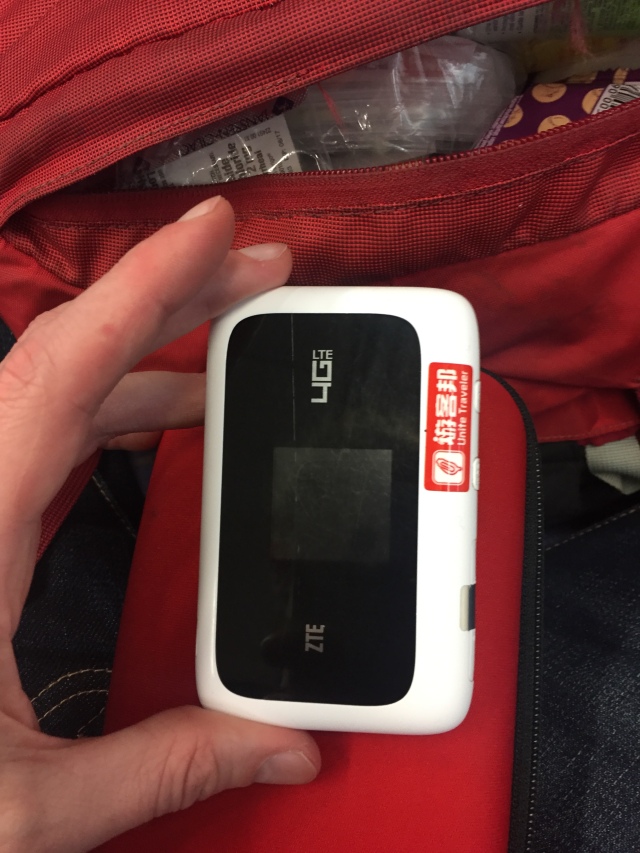 $2 per day and unlimited data. It really makes traveling easier and eliminates some of the planning /logistics.

I arrived at my hotel a little after 8am and couldn’t checkin, but was able to leave my bag. I tried to pay extra money to checkin early, but that didn’t work. I then asked if the attendant thought it was going to rain. The streets were wet and the forecast said 100% chance of very heavy rain, but I thought that the rain might be over. The attendant said it wasn’t going to rain so I chose to take the advise of someone who lives in Taipei, but doesn’t really speak English over the internet and leave all my rain gear behind.

I then left the hotel (hostel might be a better word, it is a private room, shared bathroom, $75 total for my entire stay) and walked to a temple. I found a 7-11 and was able to buy a water for $20 and pay with $1000, change!!!!! The temple was full of locals chanting/singing and I was the only western tourist in site (talking with Taiwanese I have gleamed that most of the tourists are Asian and there are more Europeans than Americans in recent years). I then went on search for non airplane breakfast. I ended up at a stall and did the old point and hope technique and ended up with a tasty breakfast and if a line didn’t form I would have had a second.

The one temple photo I will up load.

My nourishment restored I headed back to the subway and headed to the Chiang Kai-shek Memorial Hall which is a pretty impressive complex to say the least. What I remember learning about CKS is that he was with the Nationalists against the communists and was a good guy who ended up having to flee to Taiwan when he lost against the communists. Well I have now learned that while he was in control of mainland China he was responsible for the White Terror in Taiwan (killing thousands of people/leaders after the escalations of tobacco tax issues) and was a strong dictator. The politics of Taiwan are not what I would have guessed. They are pretty progressive (same sex marriage is legal, plus or minus a couple weeks), but have only had directly elected leaders for ~20 years.

Breakfast. It was an omelette then put in a tortilla like wrapped. Really good.

Changing of the guard

All the selfie sticks!!!!

While I was walking around the grounds I discovered that it is better to listen to the internet than someone that doesn’t really speak English when looking for weather advice. It started to RAIN. I mean RAIN. I mean RAIN that has caused bridges to be washed out, the levy walls to be closed, and has been compared to typhoon rain. Lucky for me I listened to the person who didn’t speak English (he still spoke more English than my Chinese) and didn’t bring any rain gear. The gift shop was selling umbrellas for $300, that is 10USD, RIP OFF. Of course I didn’t spend 10USD on an umbrella so  I strategically listened to the rain while learning all about Chiang and when it abated I headed out to get some coffee (I have been up since 230am local time) and bought an umbrella for $99, 3USD, affordable. The issue with getting coffee is that I had a particular place in mind that was owned by a dentist turned Taiwan history collector nut and was located on the third floor of a building and you had to walk down an unmarked doorway to find it and google, my map app, and Lonely Planet all had it in a different location on the map……………….

The not very obvious entrance to the cafe

After my coffee the rain had become RAIN again and I headed to a place famous for beef noodles. Well I went to the wrong place for first lunch and for second lunch (4 minutes later) went to the right place. It was now only noon and I headed to learn some more Taiwanese history and then for a craft beer (not very good porter). I then headed back to the hotel and checked in and took a 1hr nap that turned into almost a 2hr nap, but I rallied. 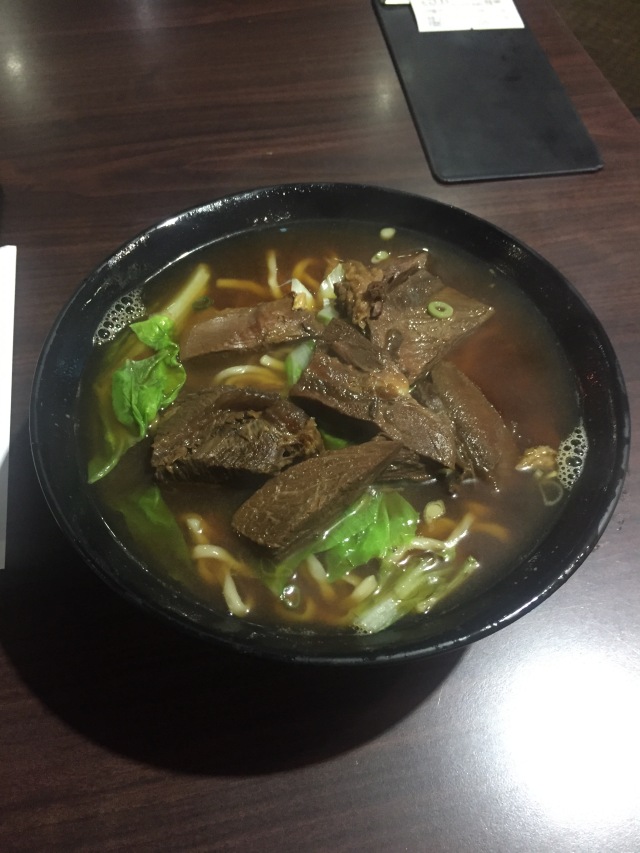 I headed to a night market, the wholesale garment district, COFFEE, and then a craft beer bar. I then called it a night around 11pm which is a win in my book for adjusting to the slight time zone difference.

Bubble tea in a bag

Night market with some rain 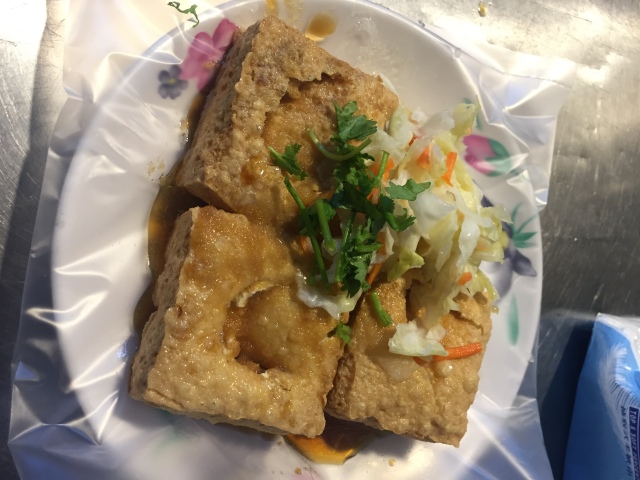 Stinky tofu, I last two bites. It was a struggle.

The microbrew scene in Tawain has taken off in the last three years. This was used to rinse the taste of stinky tofu out of my mouth.