Tokyo->Beijing->Ulaanbaatar->Ulgii, now no planes for awhile 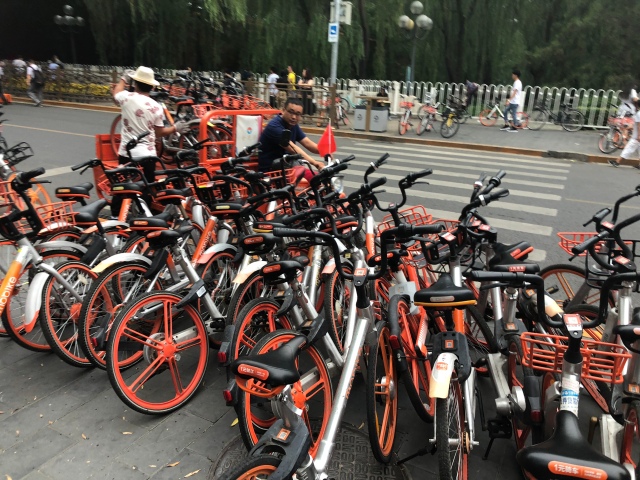 Bike shares have really caught on in Beijing since I was last there. The cart in the background was redistributing the bikes

We had an early morning departure from Japan. By early I mean 9am, but unfortunately the very convenient airport bus that leaves directly from our hotel does not run before 830am. Fortunately we were pros at the specific train line we needed to take to get to the airport (as we had taken it the night before on our ramen adventure) and arrived without a hitch, and it was $4 cheaper than the bus

We processed out of Japan quickly and spent some time in the ANA lounge which isn’t as nice as many other lounges we have visited. It did have some solid whiskey, sake, and tea, just what everyone needs prior to a 9am flight. One word of warning is that the shochu is terrible (Katy warns everyone to stay away from it).

We had an on time departure on our Dreamliner with the same lie flat seats as our transpacific leg. I promptly lost my iPad into the abyss beside/beneath the seat. This might sound trivial; it was not. The seat is contained by a giant plastic piece, and the iPad slid between me and the wall into the dark space below with minimal options to retrieve it. I found a small plastic flap and tried to reach it that way, multiple times, and failed. The unfortunate byproduct of each attempt was various scratches on my hands/arms of varying depths. Shortly after we got in the air Katy came to the rescue and had me index my seat forward and she was able to retrieve it from the abyss without a single wound to show for it. While my iPad was still in the abyss I was told that I couldn’t get my preferred meal and had to get the international course because everyone else wanted the Japanese meal, and I was the only westerner on the flight who had ordered the Japanese meal. Well, they didn’t say that last part out loud…

The rest of the flight was uneventful, and we landed in Beijing and started the process of figuring out how to get our transit visa. It was clearly marked by signs, but the difficult part was that the signs had you go through gates with Xs, against the flow of traffic. We followed some other brave souls who elbowed their way through. The rest of the immigration process was surprisingly fast (I put on a long sleeve shirt to cover my war wounds from the seat), and we were soon in a taxi on our way to our hotel.

We were staying at another hotel on points, the Renaissance Wangfujing, which turned out to be really really nice. We were upgraded to a club level room overlooking the Forbidden City, which you could even see through the smog (Katy notes that the smog was at least as impressive as the view). They had decorated our room with flower petal bedecked towel swans in honor of our honeymoon and gave us a bottle of wine. 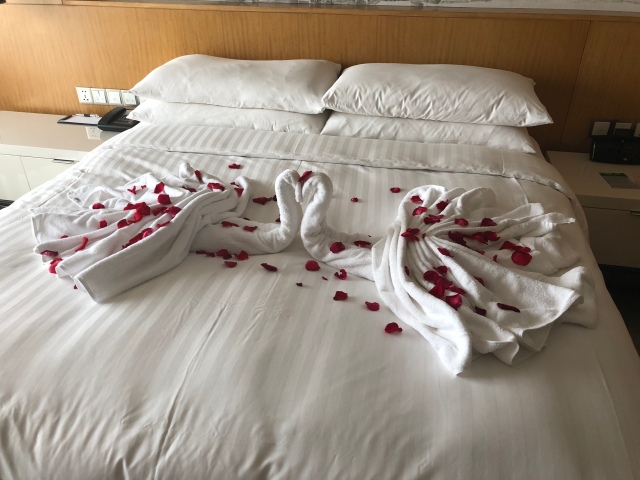 We then started our stroll towards the forbidden city, a giant temple complex that was initially established by the Mongols as an oasis inside the city where they could live in gers and let their animals graze. Unfortunately, after much searching, we discovered that tickets were sold out for the day, all 80,000 of them. It actually was very believable because of the huge hordes of people all over the place. We then went to Tian’anmen Square and had a quick look. While it had looked ominous but stayed dry to this point, our weather luck did not hold, and it started to rain. We tried to catch a DiDi, the Chinese version of Uber (Uber sold their China business to them for a decent stake in the company), but failed due to high demand. They need to get better at surge pricing. 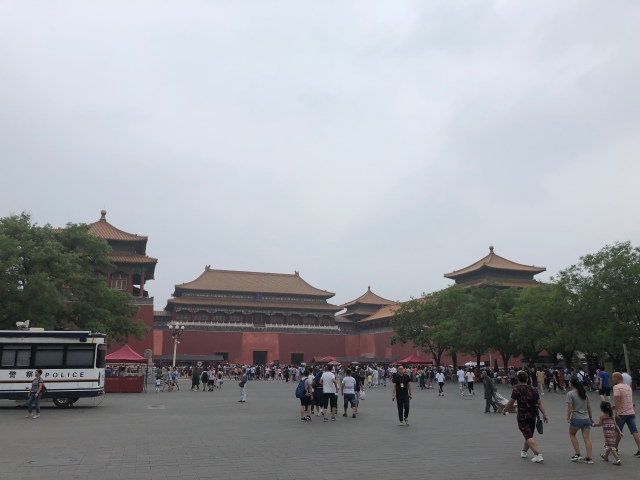 We arrived back at our hotel slightly less wet than dogs that had gone for a swim, after a quick detour to stock up on $0.50 beers and some fancy green drink that Katy wanted (Katy says it was delicious) . After four days of pretty nonstop travel we ended up having a low key evening in with a little Catan in the lobby. It is hard for me not to try to see and do everything, but sometimes, especially on a long trip you have to slow down a little and be okay without seeing everything.

The next morning the lounge was closed for an “urgent air conditioner repair”, so we ended up being given access to the buffet breakfast. It turned out to be a super super impressive buffet. It was so expansive that I measured that it took me 43 paces to walk the length of it. Neither of us had the patience to count the numerous dishes available. 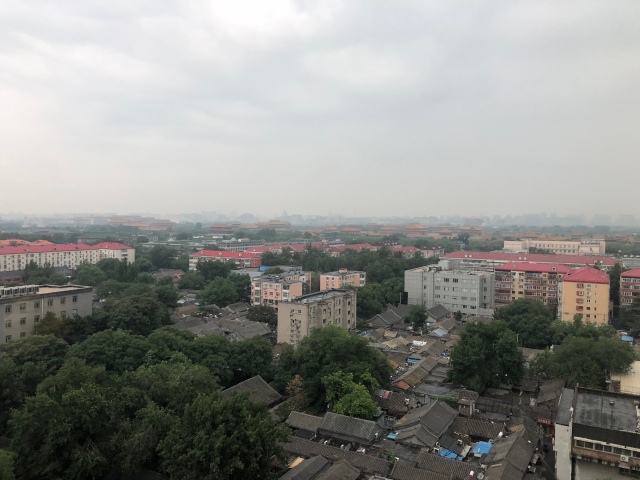 Luckily, it was not raining when we departed for the airport, and we were able to get a taxi without an issue. Since we had the fancy award ticket, we were able to check in without a line to our Air China flight. If you have flown mainland Chinese airlines, you know that they tend to have giant lines and less than excellent customer service. Our last experience with a Chinese airline ticket counter (en route home from Korea) ended poorly, with me standing there saying that I don’t care if we are going to fly that day or not (we had been delayed and so missed our connection), but that I just wanted to know either way, and then we stood there until the agent slightly chuckled, which we took as a no, so we went to United and booked a flight home for that day. 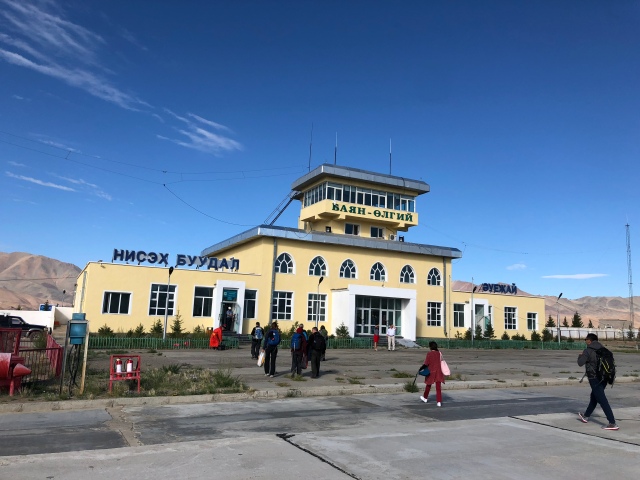 We arrived in Ulaanbaatar, Mongolia after another uneventful flight. We took out cash at the ATM and started to make our move to get into the city. One thing that makes travel easier than 20 years ago is the ease with which you can get money. We have a Schwab debt card, which doesn’t charge any foreign transaction fees and reimburses all ATM fees, which beats needing to exchange money ahead of time or obtain travelers checks. We got slightly ripped off by the taxi driver, paying about $5 too much ($17 instead of $12) for our 30 minute cab ride to our hotel.

My first impression of Mongolia was that it is very green, has warm Colorado-like sun (Ulaanbaatar is at 4,000+ feet), and is pretty cool (60F). After we arrived at our hotel, we set out to explore and discovered that I needed a Cyrillic refresher. The Mongols created their own written script about 700 years ago with 42 characters but have since switched to Cyrillic characters. There are talks of reviving the old written language, but it is a vertically written one that doesn’t easily lend itself to horizontal adaptation, which is an issue with all the technology that depends on horizontal script today.

My impression of Ulaanbaatar was that it is like a Soviet Colorado. The architecture is very stereotypical of soviet apartment blocks, but the climate and the strength of the sun are very Colorado, as are the surrounding foothills. We ended up eating Chinese food for dinner. We figured that we had three weeks of basically straight Mongolian food coming up, which is not known for being the best food in the universe, so we wanted something different for one more meal. The prices seemed really high, about $4-$10 per dish, but we discovered after we ordered an appetizer and two normal dishes that this was because they were meant for two people each. A couple Golden Gobi beers, tea, and enough food for a small clan set us back $23. Despite being stuffed, we walked by a shack selling soft serve ice cream, and $0.40 later we had one ice cream cone. The ice cream was actually really interesting. It was vanilla but wasn’t very sweet and was very rich and had a strong dairy taste to it.

Dinner with our small mountain of food

We went to bed as soon as we got back, around 930pm, to prepare ourselves for our flight the next morning that our guide Nurbie said we needed to be at the airport at 4am for. Turns out, you don’t need to be there that early, but regardless we got there at 4:15am, and the flight boarded promptly at 5:35am. We were heading to western Mongolia on a full (of white tourists) 80 passenger propeller plane. The domestic side of the airport has a single “gate” and no signage. We went to stand up when a flight was announced but were told by a Mongolian passenger in line that it wasn’t our flight being called. He could tell because at least 80% of the people going to Ulgii are westerners, compared to one who was on the other flight. It is prime tourist season right now, but in rural Mongolia that still doesn’t add up to a lot. 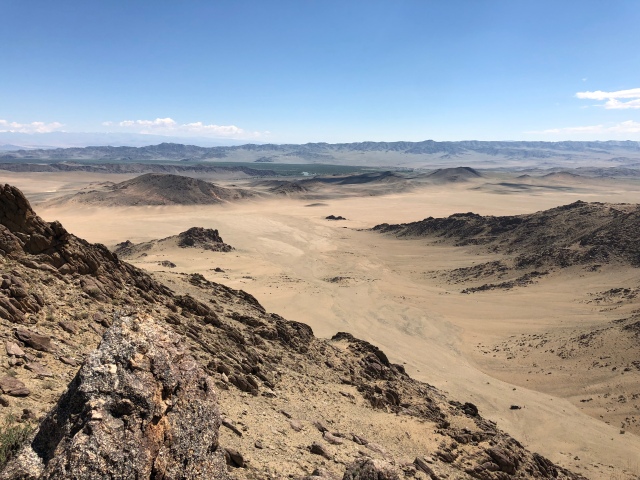 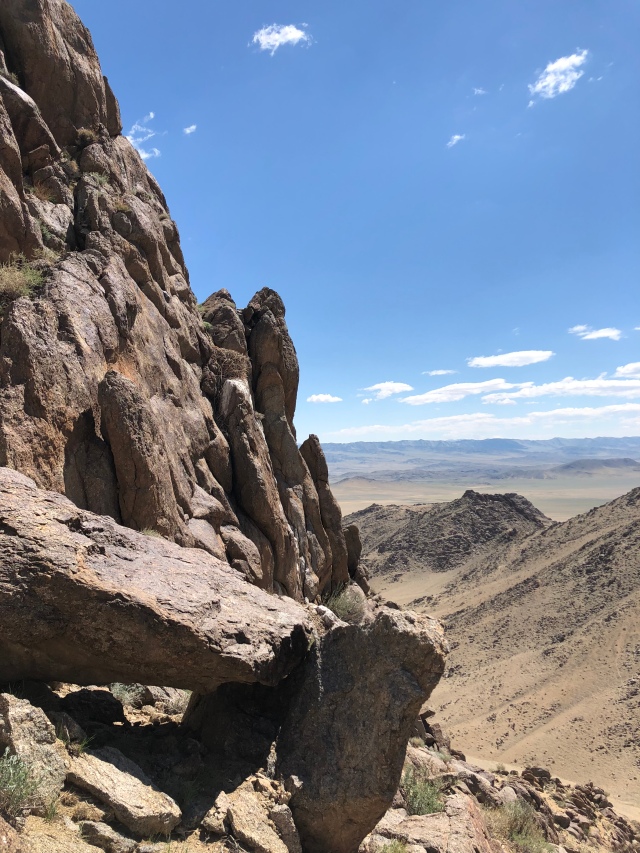 Sorry for the lack of photos, the internet’s upload speed is pretty nonexistent where we are and want to get a quick post published.