I got eagle drool on my pants 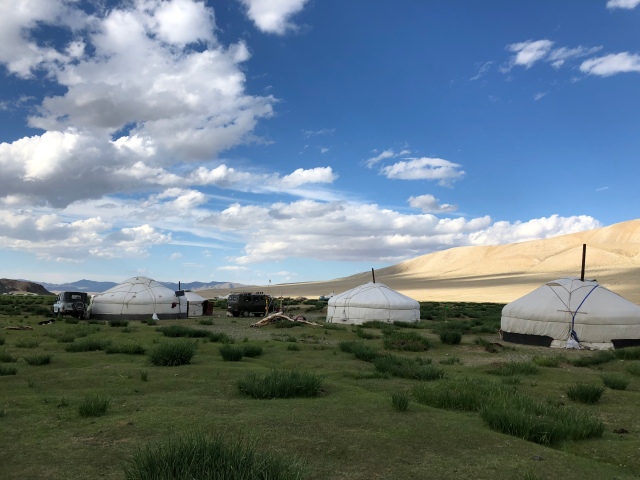 The eagle hunter’s summer camp. They will stay here two months between moving to a new spot

I am not talking about a Dungeons and Dragons potion, but legit golden eagle drool. 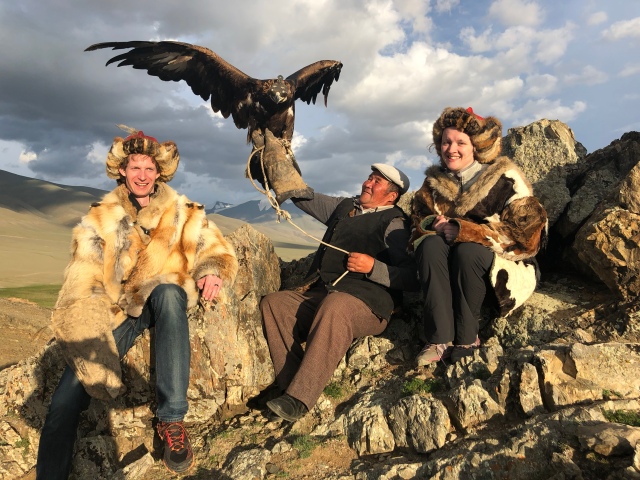 It all started when our three hour long propeller plane ride landed in Ulgii, Mongolia. We disembarked onto the tarmac and gradually wondered into the Soviet train station looking “airport” at the same time the next set of passengers was loading.

We were wondering if there was going to be a sign with our name or how we were going to meet up with Nurbie. It turns out that Nurbie had been studying our passport photos and came up to use along with a crowd of three people. After introducing himself one of the first things that Nurbie said was, “America ! Great country, great cars, great BIG people!”. Nurbie himself is a slender 4’10.

It turns out that Nurbie had another tour with 12 people, so he arranged another women Elka to be our guide, and a husband and wife to be our cook and driver. We were slightly disappointed to not have Nurbie be our guide, but Elka is a 37 year old English teacher who has been guiding during the summers for the last five years. Her English is intermediate plus, and she is very enthusiastic so it will work. 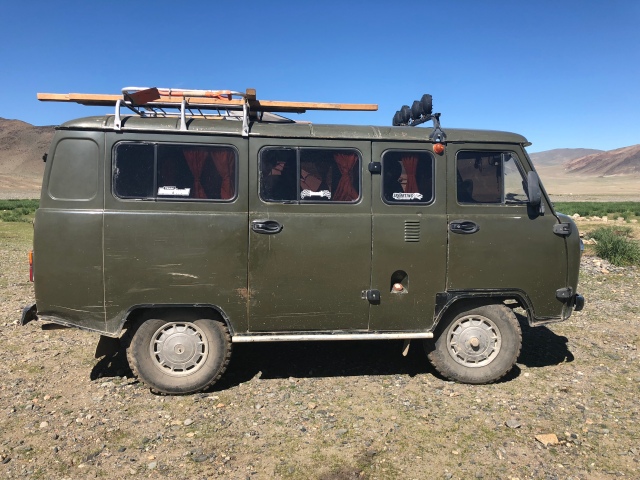 Katy milking the goats. They get about 5 liters a day from their herd

We then bundled into our vintage furgon which is a Russian van. The back is equipped with a forward facing bench seat and two rearward facing bucket seats with a small table between them.  The sound system is a hot wired Phillips five inch speaker that rests between the driver and the passenger seats. On the roof are large assorted pieces of wood that I have no idea what they are for. As we headed out of town the driver remembered that he had forgotten the jack, so we made a quick detour. 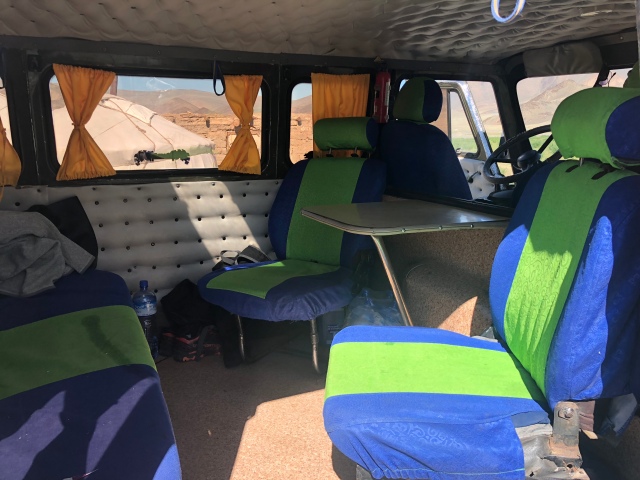 Inside of the furgon, after market seats

The asphalt roads of town quickly run out (read within five minutes), and we get to experience the off-road capabilities of the furgon. After two hours of being jostled around, we arrived at a bug infested area. Being honest there were a decent number of bugs in Olgii, but where we stopped there were so many that I had fears of the entire trip having it be uncomfortable/unbearable to just be hanging out. We put on long sleeves to give the mosquitos a smaller target area and then started trudging up a hill. It turns out we were going to an old eagle’s nest, which was unsurprisingly huge. The view was super impressive. There are rolling hills of various colors along with snow capped peaks in many directions (including looking in at Russia across the nearby border). We came down the hill and had lunch that Baku had prepared. It turns out that she prepared one meal sans meat for Katy and a different one for everyone else. Katy only accumulated a pile of 14 mosquitos that had dive bombed her lunch and 26 mosquito bites. Needless to say we didn’t stick around that area long and headed out. One thing about the diesel smelling furgon is that it does not close tightly so there was equal density of bugs inside as there were outside. After driving for 15 minutes the bugs were either killed or left in our dust. We then passed Atlai, a famous eagle hunter’s winter house. His daughter is an eagle hunter too, and there was a documentary that has appeared at a couple film festivals featuring her. 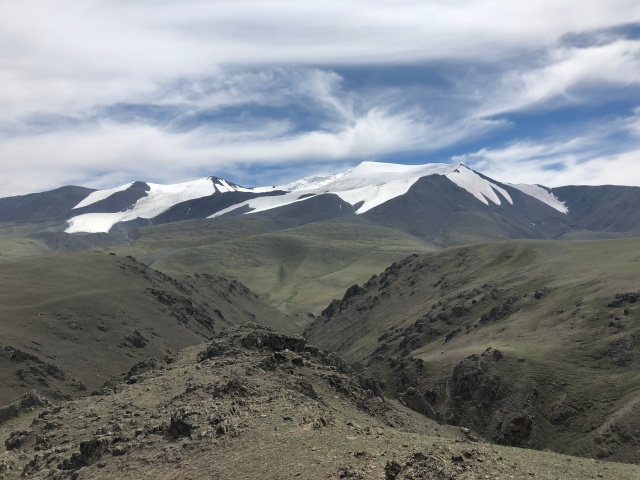 Many people in this area have a winter house which is a built structure either in a town or in the country that has various pens for animals. During the summer they leave that area so they are grazing the land (leaving it for winter) and make camp with their gers. Frequently extended family camps within close proximity of each other. The area that we are in is 90% Kazakhs, who speak Kazakh (along with Mongolian). Kazakh, in my opinion, is a much easier language to learn the basic words, compared to Mongolian (Katy disagrees). We bumped along for about another two hours until we arrived at the eagle hunter we stayed with. They have four Kazakh gers (which are wider, taller, and decorated with more colorful weavings compared to a Mongolian ger). One is for guests (us), one is for the grandparents with their youngest son and his new wife. The other two are for various other family members. They positioned the gers in a green valley close to the river and in an area that has considerably less mosquitos compared to earlier in the day. 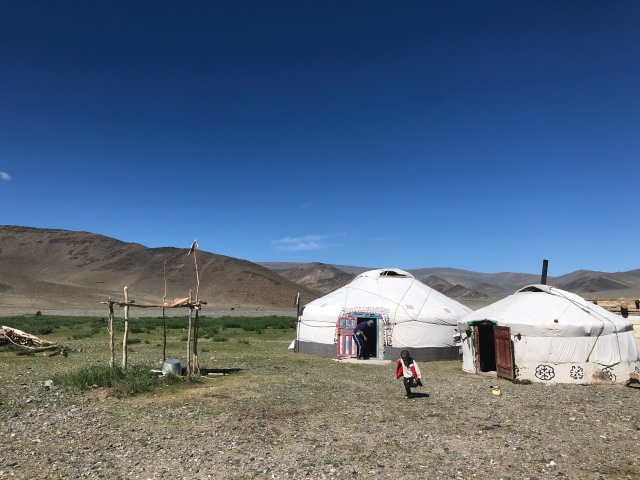 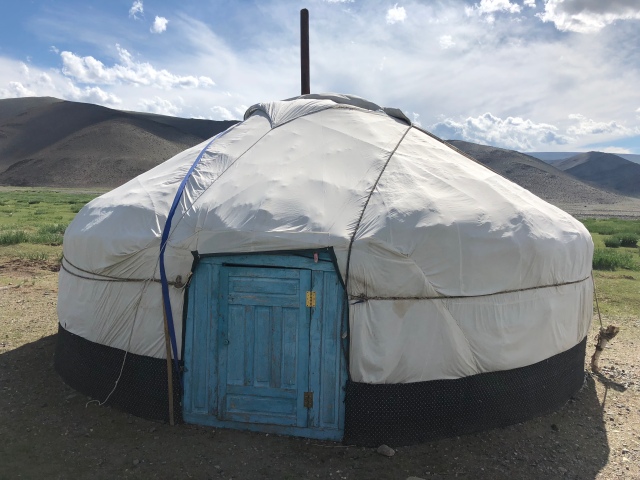 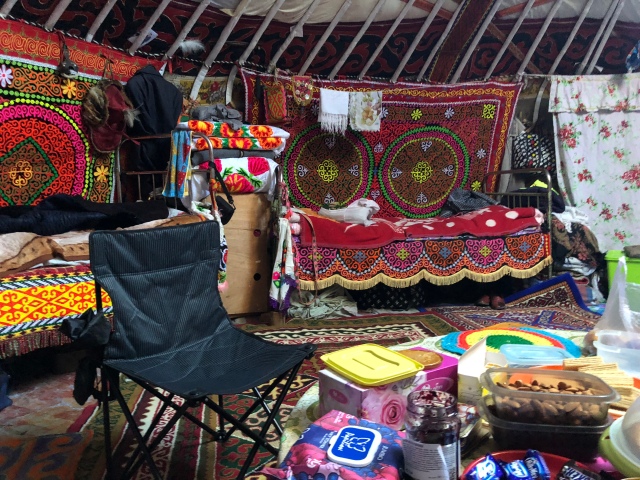 Dinner table and the two single beds for the parents/grandparents 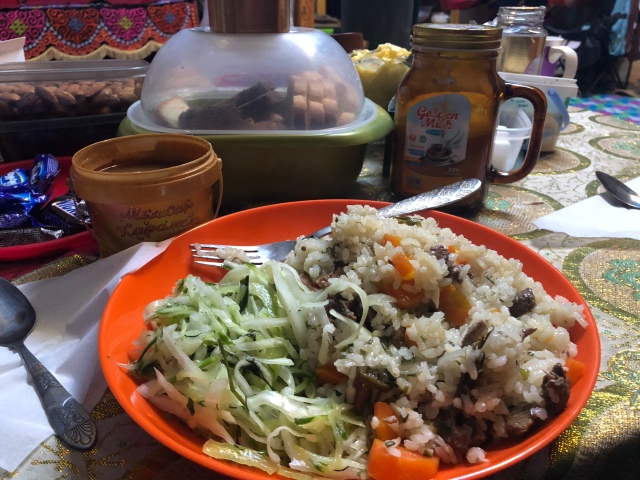 Dinner. They insist on giving me way more food than anyone else. 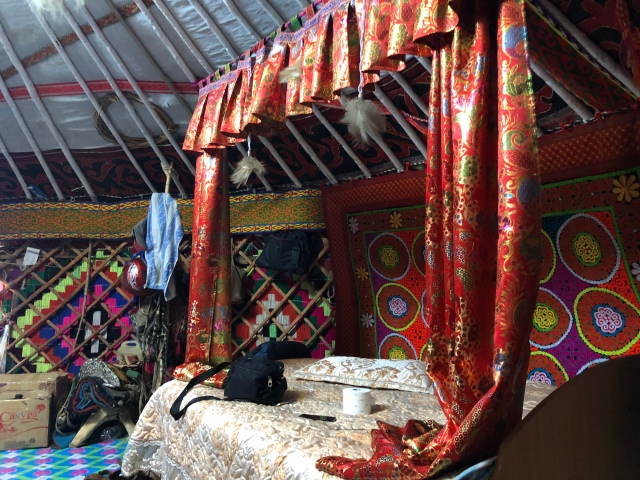 Once you get married you stay in your parents ger. You get a privacy curtain. You are expected to produce a child within a year.

We then met other the grandfather and grandmother in the ger and drank milk tea, a very sharp cured cheese, and Kazakh bread. Through Elka, we talked to the grandfather for a bit, mainly about the customary introduction topics.

Katy and I then went outside and played two games of Catan (I dominated both). We then got in our furgon with the eagle hunter, his son, and the eagle. An eagle is a rather large animal to have in a van in my opinion, and it promptly took a poop on the floor. All of which, the eagle hunter found hilarious. His laughter may been fueled by Katy’s nervous laughter, which there was much of. We arrived at our destination, an out cropping of rocks that looks into the valley and disembarked from the furgon. They then decked us out in traditional garments (I got the fox skin one), and they gave me the eagle to hold. There was a slight issue during the hand off (Katy elaborates: the eagle fell upside off Todd’s arm but was still clinging there upside down until it’s handler rescued it/Todd), and we had to restart the process. The eagle is a three year old golden eagle that weighs about 20 pounds. They then tried to give Katy the eagle and after much debate she decided that she would hold the “blood thirsty creature with a sharp beak and huge talons”. Luckily she survived with all of her eyeballs intact.

We finished up taking photos and got back into the van and headed back to camp. This time they positioned the eagle with its head towards the  center of the van so if it pooped it wouldn’t poop on anyone. This resulted in the eagle drooling on my pants. I had never had eagle drool on my pants before. 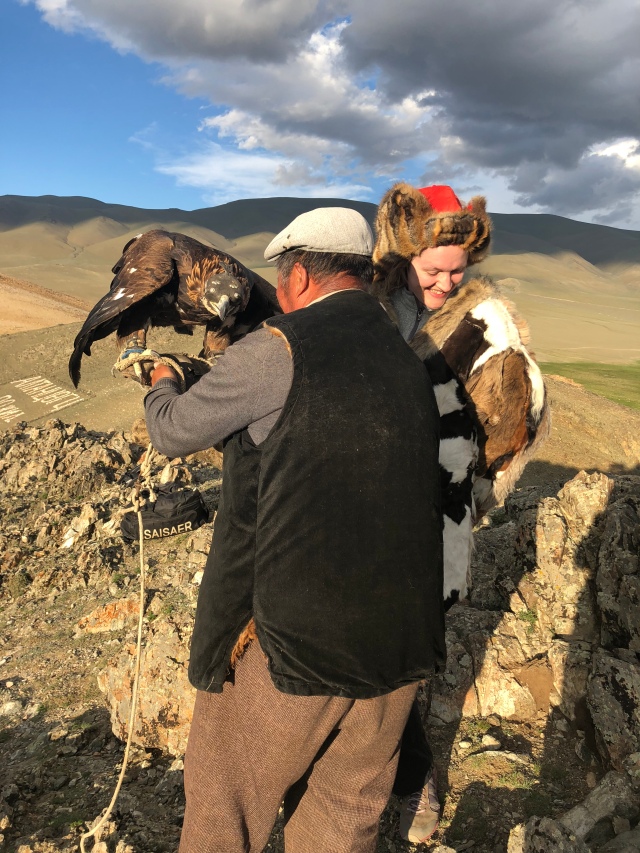 The eagle hunter handing over the eagle to Katy 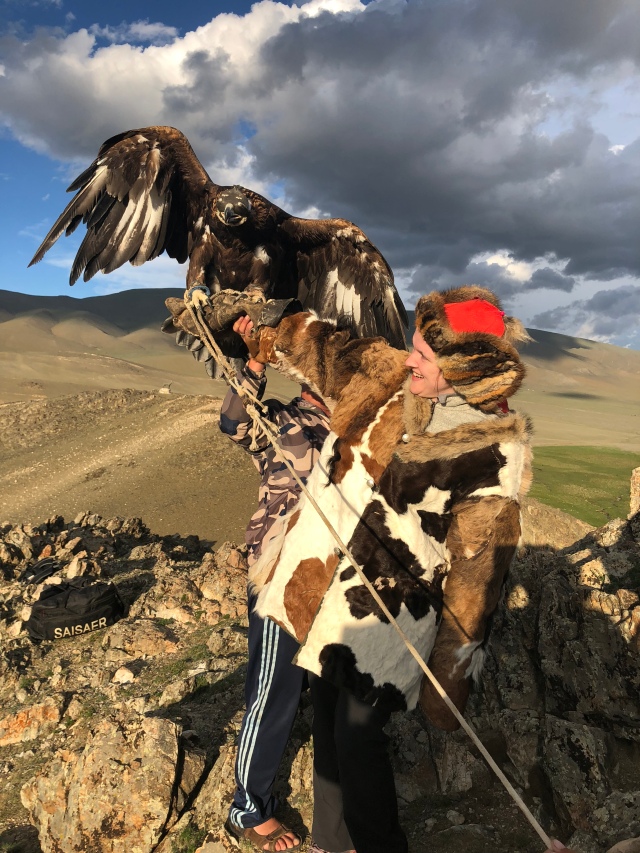 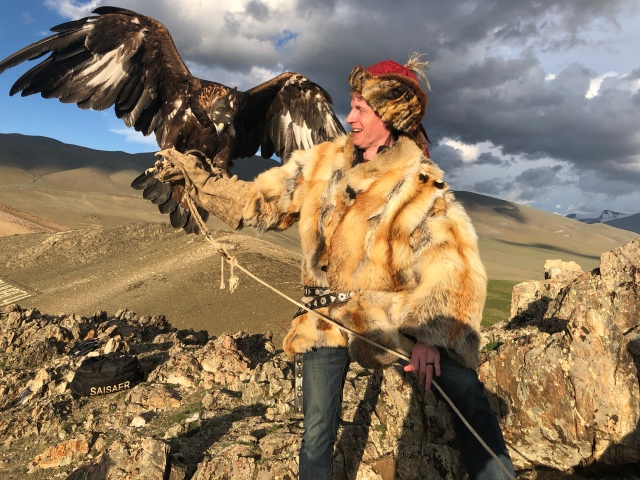 We then ate dinner and drank a bottle of vodka with the eagle hunter and went to bed around 1030p. The rest of the group stayed up past midnight finishing the vodka and merrymaking.

The next morning we had a rather late start and went for a horseback ride. We left the min valley and went through a pass to mother valley. The main valley had  a good number of gers  and the plateau and valley that we traveled to had a lot fewer. The views were spectacular and speckled with various yak, goats, and horses all of which someone owned even if they were not in site. I had named my horse rainbow fire and Katy had named her horse star sparkle. It turns out that rainbow fire was a rather lazy horse and star sparkle got distracted by any sparkle. 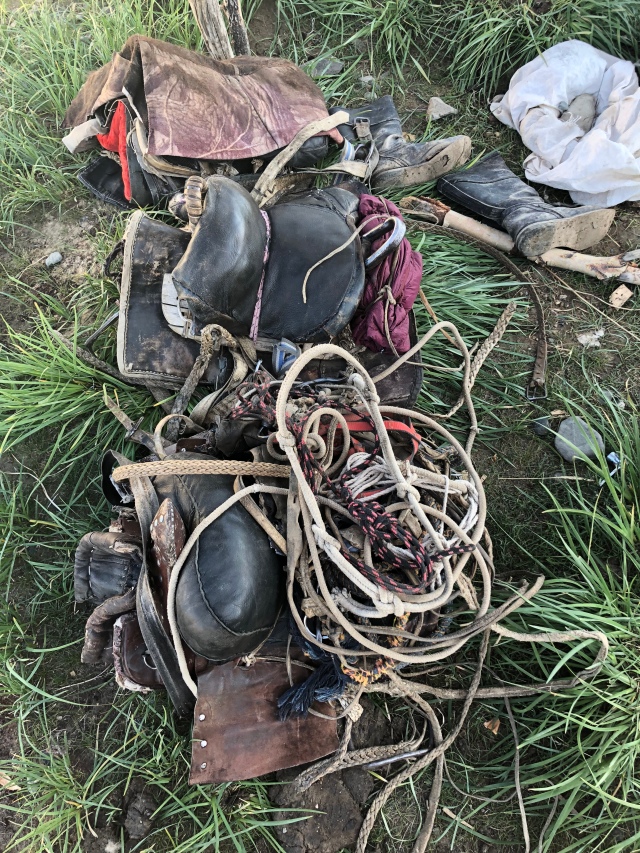 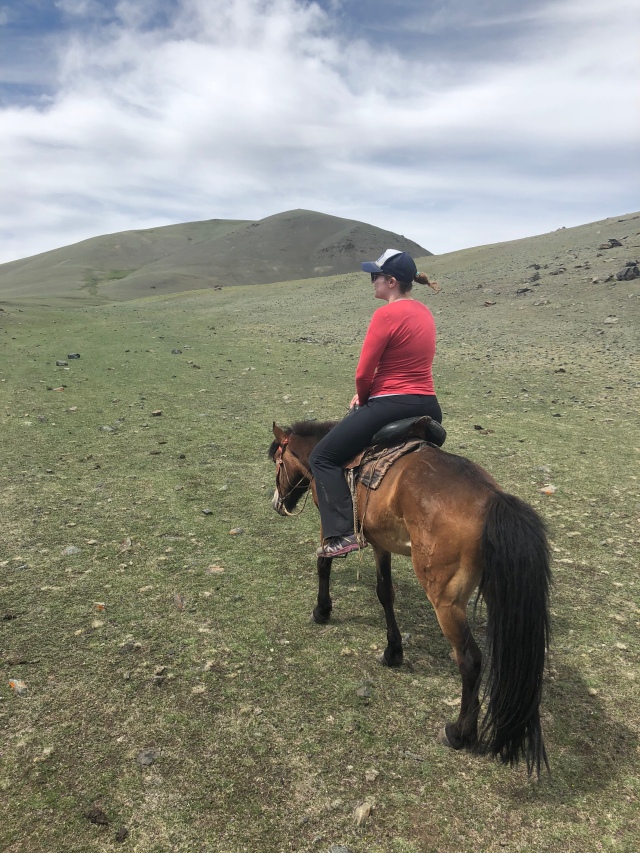 Our destination was a waterfall which was rather anticlimactic compared to the mountain landscape around it. The Mongolians were rather enthralled by the waterfall. We then began our journey back and got back to the ger camp around 5pm. All of the times that they said things would happen at were loose estimates at this point, except dinner was early this time. We ate dinner and the grandfather brought out a small bottle of vodka which we shared. Our guide told our driver that he wasn’t allowed to have vodka before we started the two hour drive back into town. After dinner, we then drove to Ulgii and had a night in a hotel. Katy was very excited for the shower even though it had only been one night without one. The next portion of our trip will be about a week without one. 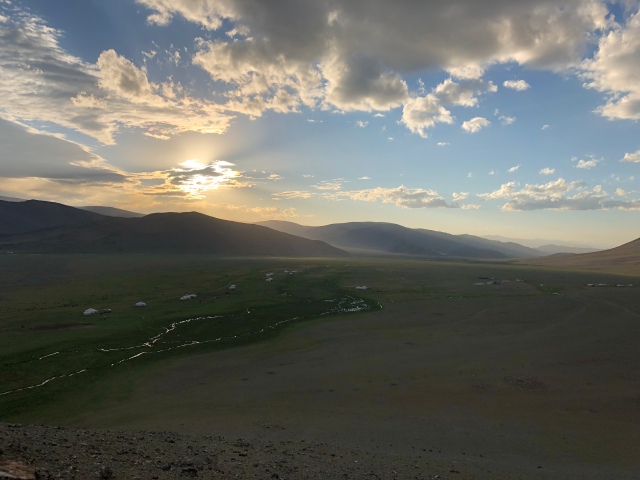