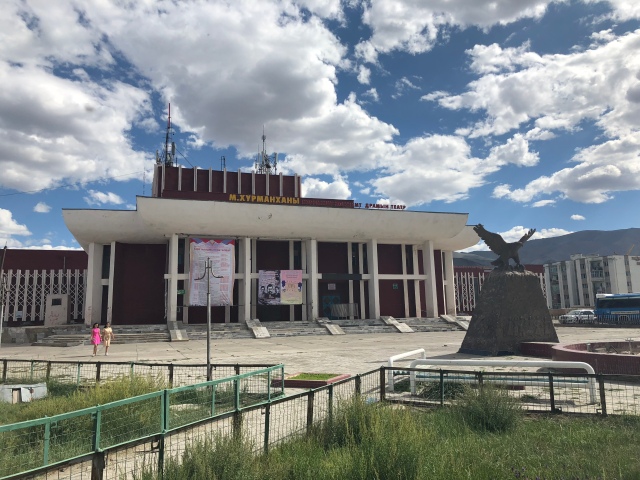 The Soviet era theater in Ulgii

The reason that we came back to Ulgii was to experience part of the Naadam festival. Naadam is an annual multiple day festival celebrating ”the three manly sports”, which are horse racing, archery, and wrestling. We wanted to experience a provincial festival instead of the large one in Ulaanbaatar, so we arranged the trip to be in Ulgii for it. One thing that we didn’t really think about was that we are in a region which is 80% Kazahk, watching a Mongolian festival. It was interesting when Elka pointed out the difference in the traditional Mongolian and Kazahk dress. 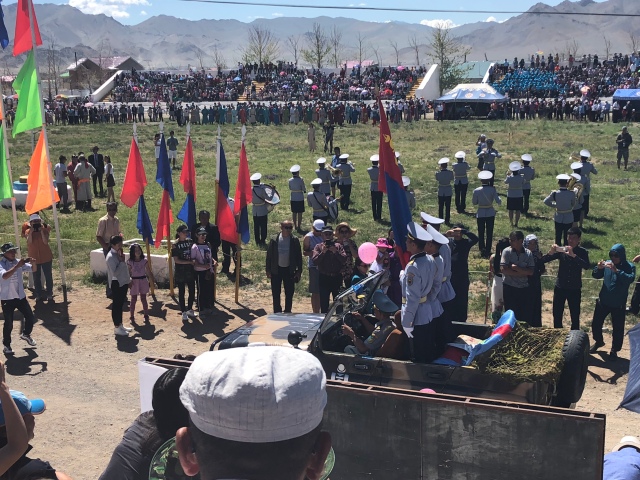 The day started with a lackluster breakfast at the hotel, which necessitated a stop at a coffee shop. Surprisingly the coffee shop had blistering fast internet and solid coffee (although, Katy claims there is no difference in their lattes and cappuccinos, the travesty). Mongolia is a lot like South Korea in that it is not a morning country. At 930am we had to hunt to find a place that was open and sold coffee. 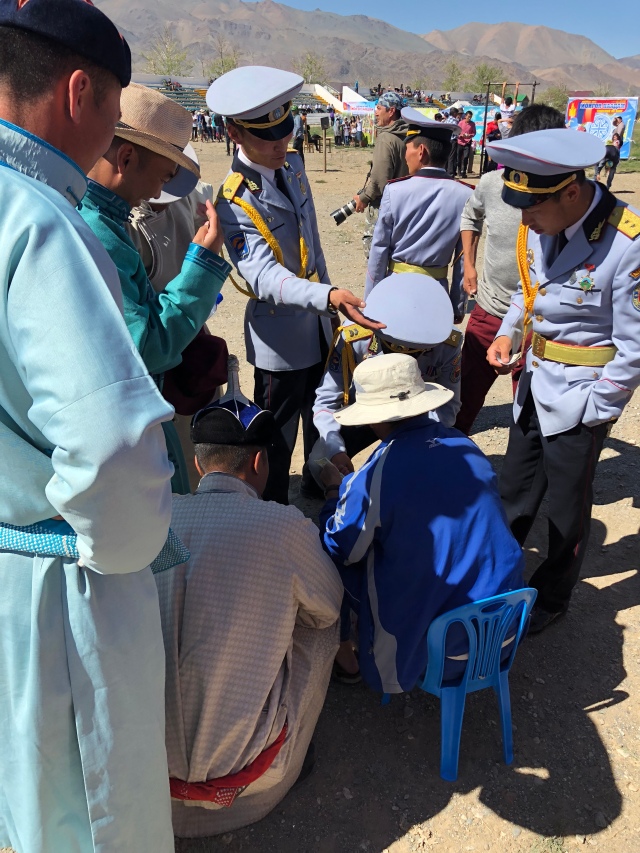 A little gambling going on 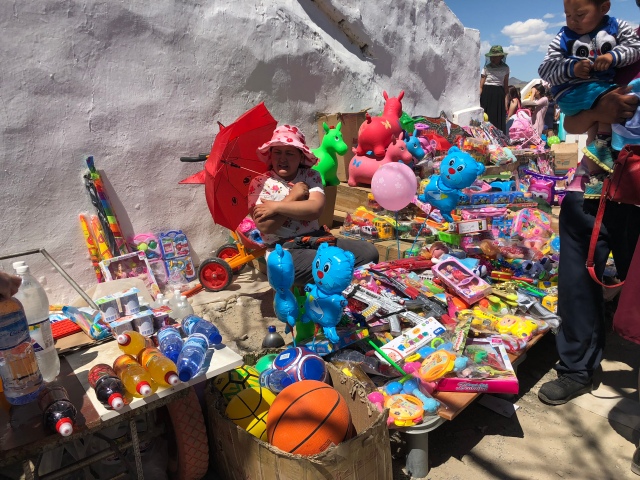 Chinese trinkets for sale at Nadaam

One thing that Kazahks/Mongolians take liberty on is time. Katy and I have discovered that every time we are given is a rough estimate. The same went for the start of Naadam. It was suppose to start an hour after we were told it was going to start and holding true to fashion they started 40 minutes after that. The area around the arena had a bunch of venders selling everything from water ($0.25) to Chinese trinkets, to balloons, to kebabs, to ice cream. The festival started with impassioned speeches in both Kazak and Mongolian followed by local community awards (like best builder) and the obligatory military jeep and marching band. Following the military marching band a troupe of Kazahk musicians emerged from the bus which was parked behind the stage and served as “back stage”. There were various musicians and singers that performed in traditional dress who were then followed by a large ensabmble of dancers. 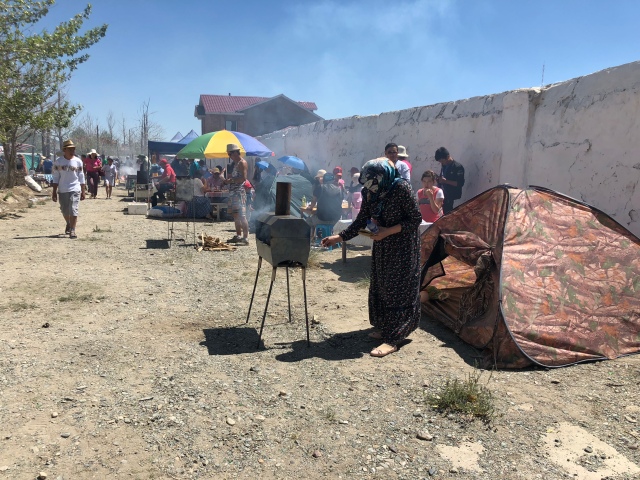 Mongolian meat on a stick for sale 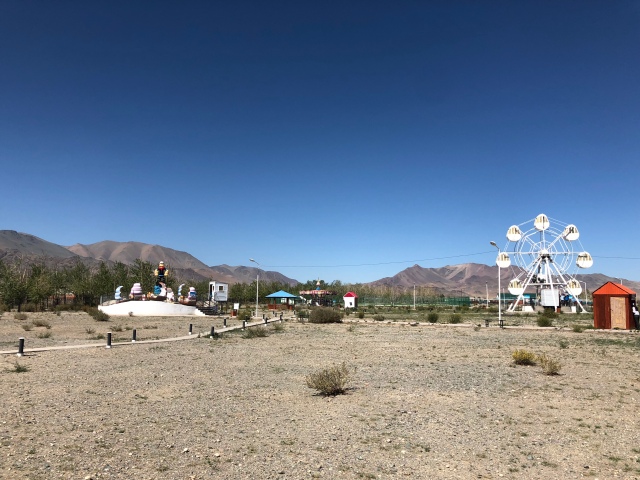 The action came to a pause and went wandering around the grounds and ate a $0.40 (the most expensive) ice cream. We then watched the start of wrestling. Even though a lot of the wrestlers were Kazahks, since it was Naadam they competed by the Mongolian rules. There are no weight classes, and anyone can participate. The loser was the first one to touch the ground. It was interesting for about 11 minutes, but I have to admit a lot of the subtleties were lost on me. 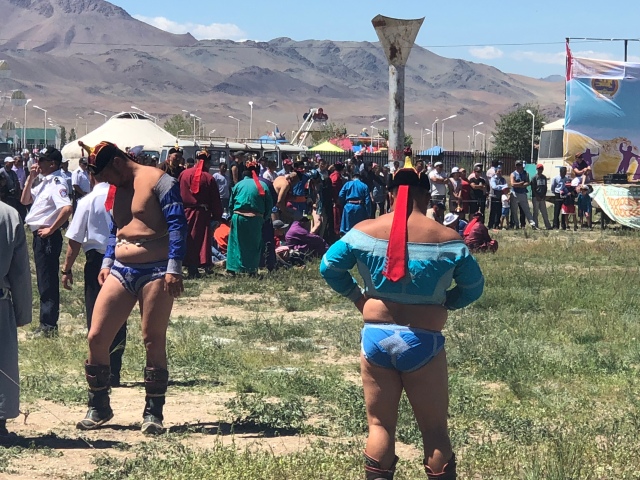 Wrestlers getting ready to knock each other to the ground

We decided to not stick around for all the wrestling and went to lunch. We then had a free afternoon and Elka took our laundry and gave it a much needed wash. We tried to buy bug spray but were unsuccessful. We did succeed in purchasing sunscreen, which claims to be 90 SPF, but we seriously doubt that claim. We were also able to find a super market and stocked up on vodka and other necessities for the week of camping ahead of us. 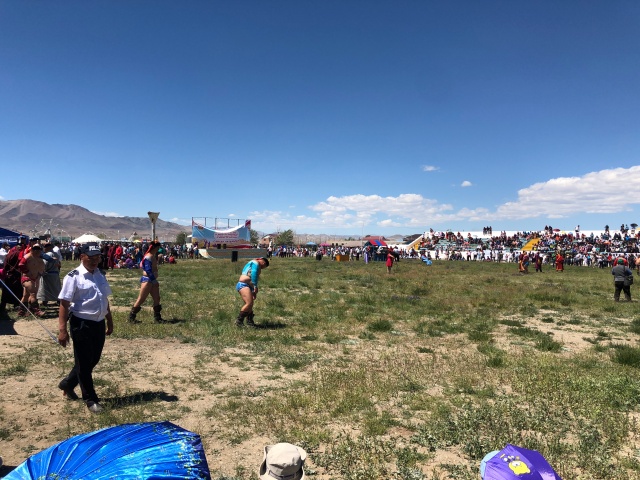 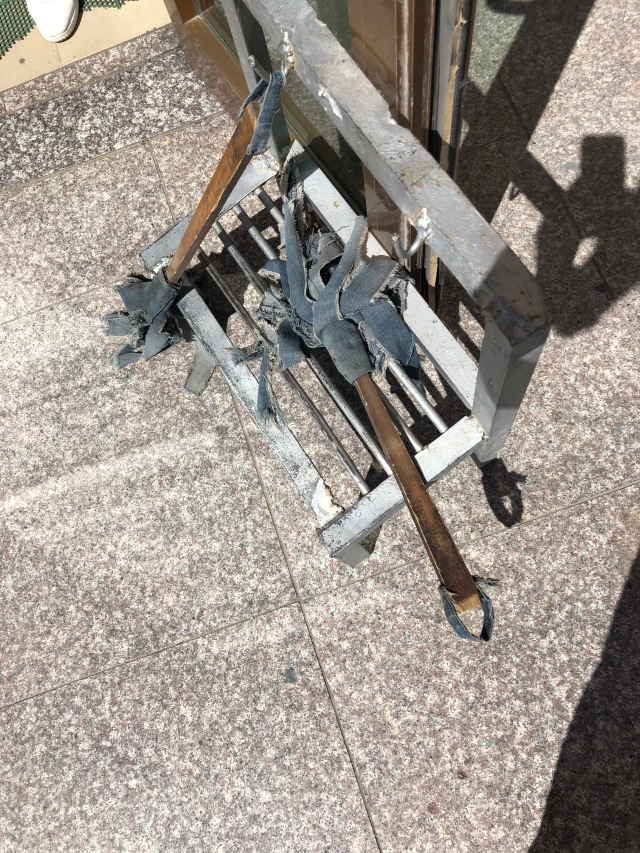 Brushes used to clean off your boots 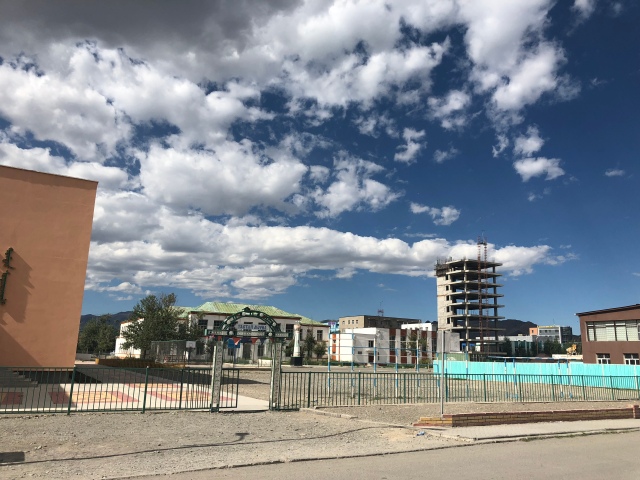 Like Loading...
This entry was posted in Around the world, backpacking, Uncategorized and tagged driving, i love ulgii, kazakh, Mongolia, Naadam, ongolian, soviet theater, ulgii, wresling. Bookmark the permalink.