The second half of our Mongolian adventure started with a rainy morning. Katy wanted one last real coffee before she began ten days of only powdered coffee. I went to place down the street and got two large lattes each with an extra shot for $6. When I was coming back to our hostel, I noticed an early 1990s Mitsubishi jeep out front of our place with a driver and guide. I was hoping this was not our vehicle. I had negotiated our tour down $400 and an upgrade to a “Japanese jeep”, and in my head I was envisioning a Land Cruiser, not the vehicle parked outside, which was technically a Japanese jeep. Luckily when we went to meet our driver, TK, we were brought to a 2016 V8 Toyota Land Cruiser (might be a hybrid). That caused genuine excitement, it had air conditioning, suspension that was not based on the principle the faster you drive the faster your butt goes numb so you can’t feel anything, seat warmers, rear cigarette lighter so we could charge devices, and leather seats, all a far cry from the Russian Furgon.

Today was mainly a driving day, but to our delight it was almost all on paved roads. There are not speed limit signs or really any traffic signs in Mongolia (except major cities). The universal speed limit is 50MPH and residential areas have a speed limit of 38MPH. Our driver seems to be the cautious sort, but I don’t mind that. He is 50+, from the region that our tour is ending in, and owns the car. It turns out that most drivers own their own cars (except for a few of the largest tour companies), which tends to mean they take better care of them. You can buy diesel, 80, 92, and 95 octane gas, with 92 costing $3.08 a gallon.

Our tour guide TK is 22 and has a bachelors and masters in English. He says he has been a tour guide for five years (that is what the company said the minimum amount of experience their tour guides have). His English is excellent, and he has a really large vocabulary, which is a nice change. There isn’t any of the ok ok ok and being unsure if the person knows what you are saying. He started off the trip with an overview of Mongolia, and off we went for our five hour drive. 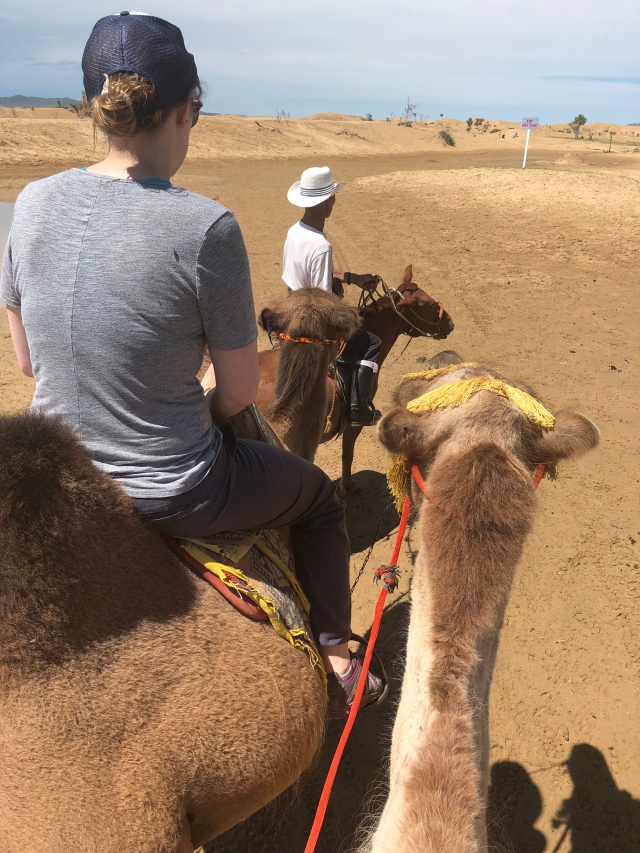 Our drive ended at a 40+ mile long sand dune. We got out of the car and went for an hour long camel ride. One unique thing about the camels in Mongolia is that they have two humps, and you sit between the humps. We have seen the camels throughout our trip in western Mongolia, where they are used as pack animals. My camel had a lot of personality and wanted to go first; Katy’s on the other hand was very content to just trudge along. We finished up our ride and then started driving towards our camp and and a nearby Buddhist temple. We had a walk around the temple, and then it began to rain. I can say with certainty at this point that it rains almost everyday in Mongolia, but thankfully the rains typically last less than half an hour. 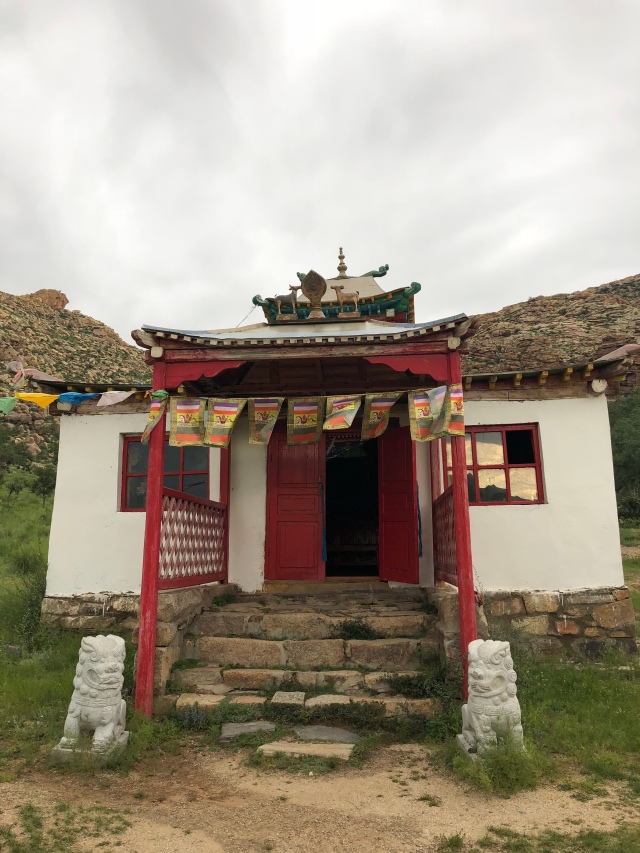 Our camp was a big upgrade from sleeping in tents. There are two main categories of gers, tourist gers and local gers. Tourist gers are camps that are made to cater to tourists. They either run a generator for five hours at night (if there is no electricity), or they have power and you get a light and a couple outlets. They also have western bathrooms and showers, no more seven day stretches without a shower. This one had a main lodge with sofas in one section and a restaurant in the other half. Local gers are locals who have set up one or several extra gers outside of their home and host tourists. 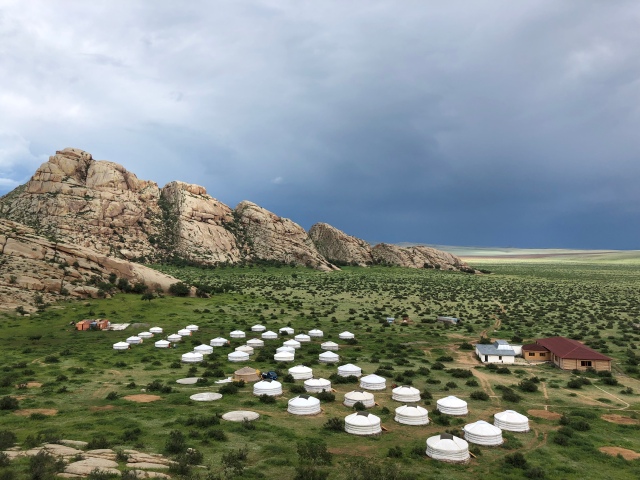 We had a leisurely evening reading our books, working on the blog, and playing settlers. I also went for a walk up the hill behind the camp in my sandals, sneakers may have been a better bet.

The next morning we had a 9am departure and headed off towards Karakoram, the capital of the Mongol empire during the time of Ghenghis Khan until Kublai Khan moved it to Beijing. The entire city has been destroyed and all that is left is a 16th century monastery. When the communists were in control of Mongolia they destroyed most of the countries temples and monasteries, but did not completely destroy this one.

We walked around the monastery and went to the surprisingly good museum nearby before we headed to our ger camp for the night. Since it was mid afternoon when we arrived at the camp we went for a walk by the river, but the abundance of as Katy would call them, giant grasshoppers, cut our walk a little short. This ger camp had a double bed and it had nice and hot water. There was only a power outage for a short time.