We left Karakoram and were suppose to have a short drive to visit a temple and a waterfall. Unlike the previous days, we did not review the plan ahead of time. We arrived at a viewpoint overlooking the Orkhon Valley and our guide, TK, announced that we were approaching our one destination for the day, a waterfall. I then asked if we were not going to the temple, and he said that there wasn’t one around. Katy then got out the itinerary and after some discussion in Mongolian we headed towards the temple. I was irritated because frankly I didn’t really care about seeing another waterfall in Mongolia, and I had specifically made sure that this temple was included. On our way we came across a small horse racing event, which we briefly stopped at. 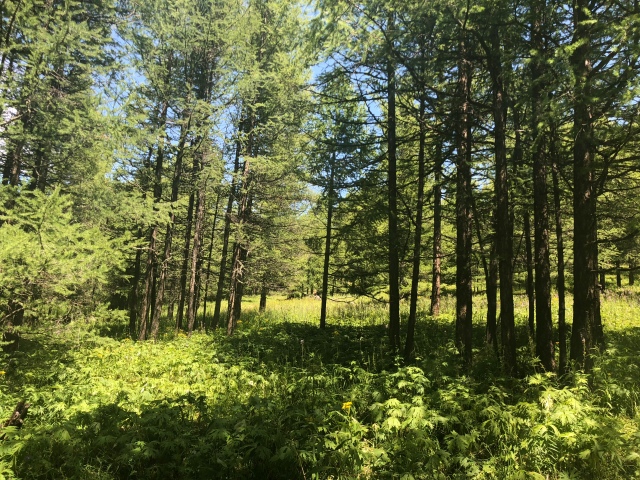 A lot of the temples in Mongolia were built by exiled Tibetan monks and princes. This particular one had about a forty minute walk up a hill to reach it. The area had relatively few mosquitos, but had its fair share of flies. Many people were riding horses to the temple, but I wanted to get some exercise, so even though we were told it would take two hours to walk versus thirty minutes to ride a horse, we chose to walk.

The temple was nestled on the top of a mountain. The various meditation caves were located around the top, and Katy saw the various cliffs that had to be scaled and decided visiting them was not her idea of a fun time. TK and I visited them, and we started down when the sky got ominous.

We made it about halfway down when the sky opened up with a nice mixture of hail and rain. When we reached the Land Cruiser all three of us were soaked. Luckily Katy and I had packed light rain jackets, which at least meant our tops were (mostly)dry. We then had a delayed departure because the road was deemed too slippery to drive on. After waiting about twenty minutes we decided to head down via the grass, which was minimally slippery compared to the dirt road. 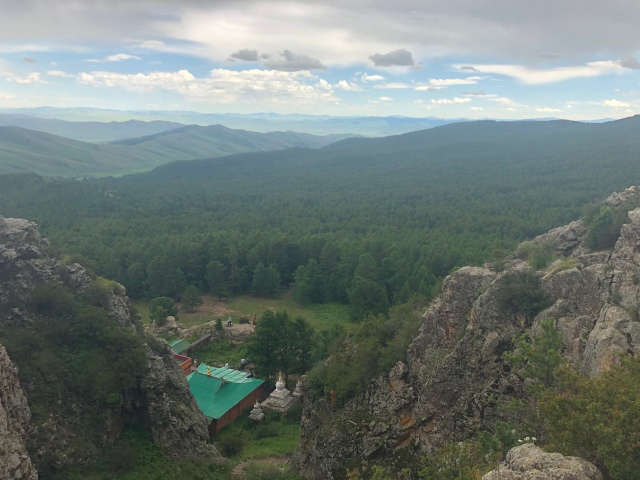 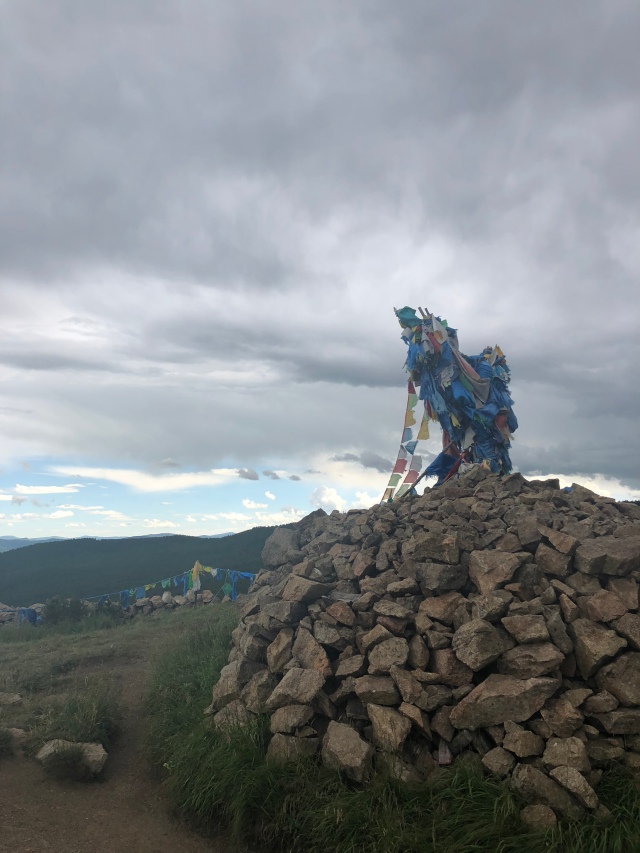 Roads in the Mongolian countryside are dirt for the most part and unregulated. There are time I have counted over fifteen sets of tracks next to each other that you can choose to drive on. The only times that there is just one track are when the road is so rocky that there can’t be more than one track, and in the few spots where the road is improved. I think driving in the muddy grass next to to the road is a sure way to start another track. Our driver rarely drove off an established track, even when it looked smoother than the track we were on.

After a couple more hours driving we arrived at the waterfall. This was suppose to be a light driving day, but it turned into a decent amount of driving, since we went the long long to and from the temple. We walked to the waterfall in our soggy shoes. Most of my clothes had dried out during the ride, but there were still part of my jeans that were pretty wet. The waterfall was the largest one than we had seen and decently impressive. We then went to our ger camp, Orkhon Waterfall Tourist Ger. We lucked out because they had double beds too. We tried to get a shower right away, but the power was out. One thing that we have learned is that power is fickle in Mongolia, and most days there has been at least a brief power outage. Dinner was a pleasant surprise for Katy because they had an unknown protein source with red specks on it. It may sound strange and disgusting, but Katy was pumped to have a protein available (the only time in a 20 day stretch that there was amble protein in a meal).

The next day was the yak festival. The issue was that no one really knew when it was, and TK didn’t know where it was. He was able to figure out that it was “over the hill” (a common expression in Mongolia, which turns out to mean that the speaker has no idea and is guessing), and so we started off around 10am. We started driving, and after 3km we stopped and asked a local where it was, and they said to continue on, you can’t miss it. We go about another 3km and see a giant tent with a bunch of normal sized tents. I get really pumped thinking that it is going to be the largest yak festival I have ever seen. The issue was that it looked like they were packing up the festival, not setting it up. We get out of the car and walk to one of the main tents and were invited in and given some dried curd. It turns out that we were at the site of a provincial government meeting between three of the sixteen(ish) provinces in Mongolia that had finished up that morning. After asking several other people we discovered that there really was a yak festival four hundred yards up the road. We went there and discovered that they were just setting up, and they were planning on starting around 1pm ( Mongolian time, which is to say anytime after 2p…), but didn’t really have a time table.

Lots of gers are required for government meetings 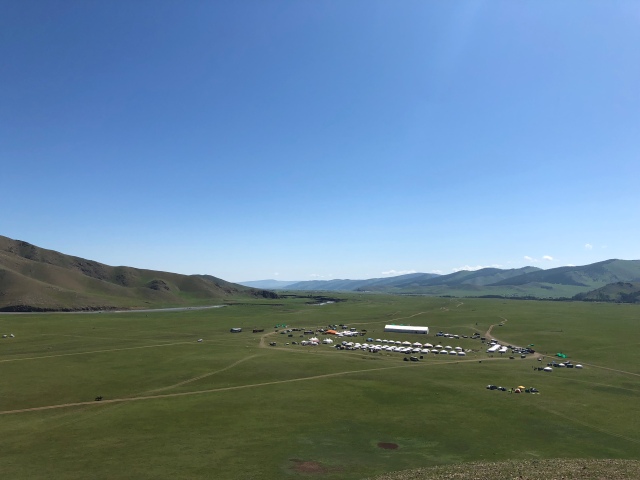 We went back to the camp to eat lunch (unidentifiable red protein onto of spaghetti for Katy) and went back to the yak festival afterward. The festival was probably 50% tourists, but was a local event, not one made for tourists. While we were waiting for the event to start we went to a van that had a soft serve ice cream machine in the back and grabbed some $0.40 ice creams to wait with. 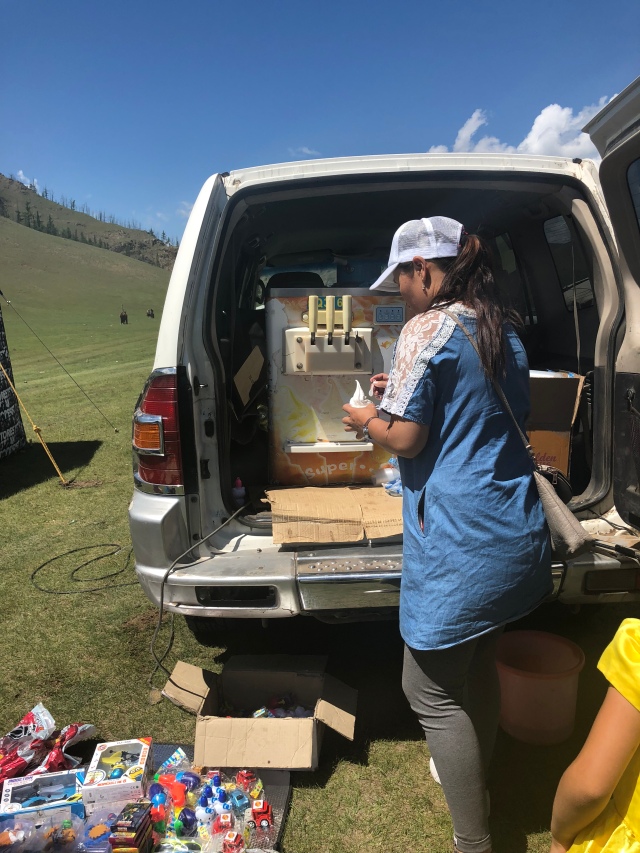 The event started with some traditional singing, horse head fiddle playing, teenage dance troupes,and speaking from local officials. There were a lot of yaks in a corral behind all the spectators, waiting for the events to begin. The hastily established corral had some shoddy workmanship though, and in the middle of the ceremony all of the yaks escaped (took several minutes for the crowd to notice). This eventually lead to all the kids on horseback (there were many) charging after them to wrangle them back into the corral. 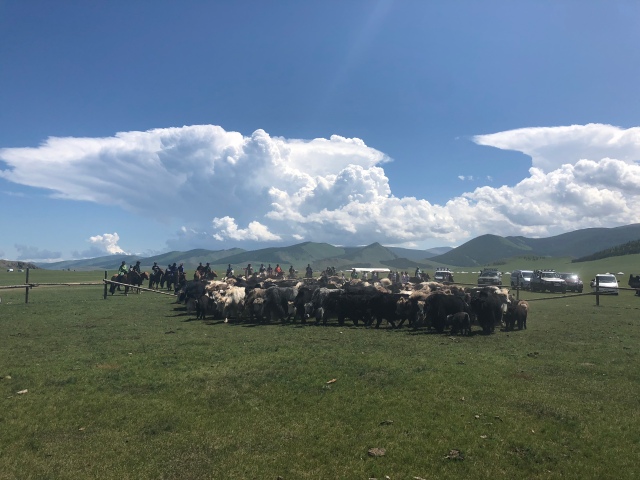 Yaks being ushered back in

The first event was yak lassoing. It consisted of two young men yelling at yaks while another one attempted to lasso one. It wasn’t the most exciting of the events.

The second event was yak riding. Imaging bull riding minus the ball cuff on the bulls. They first had to catch a yak, and then one of the riders had to get on it and try to hang on. The one arbitrary thing was how long they needed to stay on the yak or how far they had to ride it for it to count and how you won the competition. The first person to attempt the feat was immediately bucked off, and the yak was having none of it, so it took off as well. That prompted twenty people on horses leaving to chase it; they never succeeded in wrangling it and let it go. About half of the people were able to ride the yaks, with some being bucked off spectacularly.

They then let the herd of yaks wander around, and they brought out the trained yaks. The first event with the trained yaks was a yak race. There were 23 yaks registered for the race, but somehow over 30 showed up, but certainly not on time. This led to some confusion as to what yaks belonged in the race and what ones did not.

Late entries to the race

The end result was everyone could race. Most people were riding bareback, but a few had a small saddle. There was one girl (age 15) and the rest men, ranging from 8 years old to middle aged entered. All the yaks got lined up, and then people placed bets on who they thought was going to win with an 8X payout for winning. They then sent all the riders to ride their yaks 5km away to the starting line of the race. Fortunately, no one protested that their yaks wouldn’t be fresh for the race. After a good bit of waiting the yaks started to come in. It was a neck and neck race for the winner, and the girl won. The second and third place finishers were determined when one of the yaks decided he didn’t like all the people near the finish line and stopped 50 feet short and turned around. The rider then got off the yak and started to shoo him towards the finish line. Over the next ten minutes many such amusing finishes occurred.

Race for first and second place

Yak refuses to go to the finish line 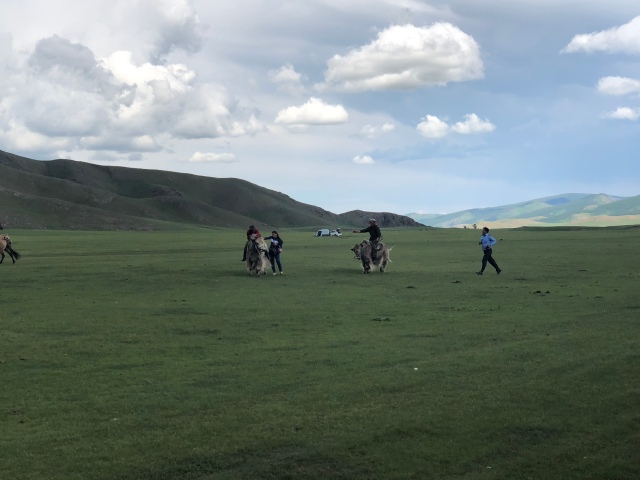 Police captain to the rescue to help yak finish the race

The next event was the second to last event, the beauty contest. The herders brought their yaks to be judged. The herders walked their yaks around and you voted by applause. There was a large random yak in the middle of the contest area. The yak was very aggressive, but beautiful. There were overhead pages for the owner of the yak to come claim it, and then it was eventually determined that the yak was in fact entered in the beauty contest, but the owner was too afraid of it to get close to it, so he wanted it to be judged without him (it seemed eager to win and engaged in some unsubtle sabotage of its fellow competitors). The random yak was not named the winner and then it was time for the final event.

The final event was was yak polo. The police captain was the referee and spent about ten five minutes wrapping packing tape around a small rubber basketball, the type you use for the indoor mini basketball hoops, which was the official yak polo ball. After they sorted out the teams and got the right people on the field they decided on one goalie and three people on the field. Some “pros” brought their own polo sticks. Otherwise they were using community mallets. Unfortunately they did not have a spares so whenever they broke one they had to take out the packing tape and “repair” it. Yak polo was hysterical and everyone playing had a blast. After playing two games each team got the hang of it, and the games got a lot more competitive. There were some mishaps like when the the announcer had to make a rule you had to be on your yak to hit the ball, when a yak charged a person wearing purple twice, and when a yak bucked his rider off and took off in the field and they needed to get a replacement yak. 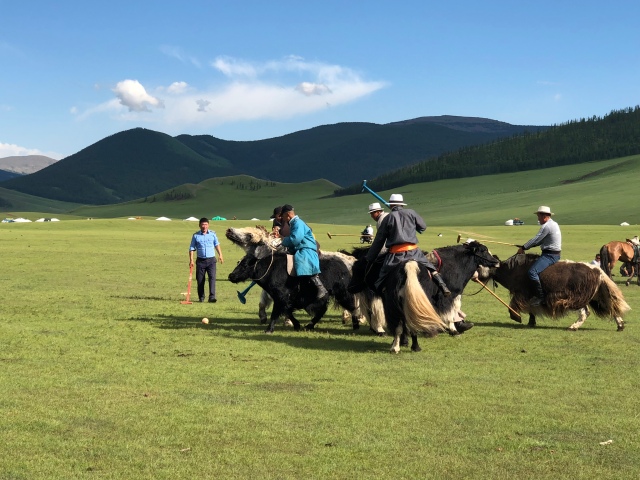 The yak fest was a blast and was a great day.

Setting up a ger 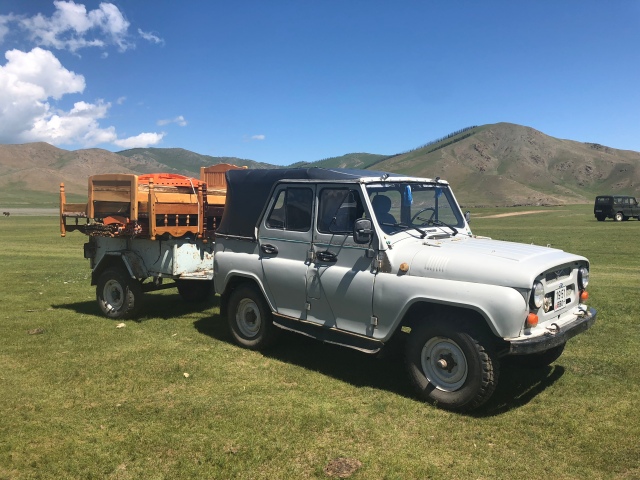