You Don’t Need Electricity to Enjoy Lakes and Hot Springs

What did we do after the yak festival? That was my thought when I started writing this portion of the blog. Day of the week, day of the month, and what order we have done things is getting hard to tell. It is awesome. There is something great about not caring or knowing what day of the week it is.

With memories of yak polo in our mind, we had a rather uneventful long drive ahead of us. We were heading towards White Lake, one of the two lakes we were staying at on this portion of the trip. The recent rain made the roads a little slower than normal and around 5pm we entered arrived at Khorgo Volcano. I knew this was on the itinerary, but I wasn’t anticipating seeing lava fields (like in Hawaii) smack dab in the center of Mongolia.

We disgorged from the jeep, and Katy made a beeline to an outhouse setup beyond the parking lot. Unfortunately she didn’t see that there was a women around them, cleaning, and collecting $0.20 to use the bathrooms. We did not see a lot of public bathrooms in Mongolia, especially in the middle of nowhere. In the cities most public bathrooms had a nominal cost of $0.03-$0.20. We walked up to the rim of the volcano crater on a lot of loose volcanic rock. A good portion of the people heading up the volcano were sporting sandals which looked rather perilous, given the footing. 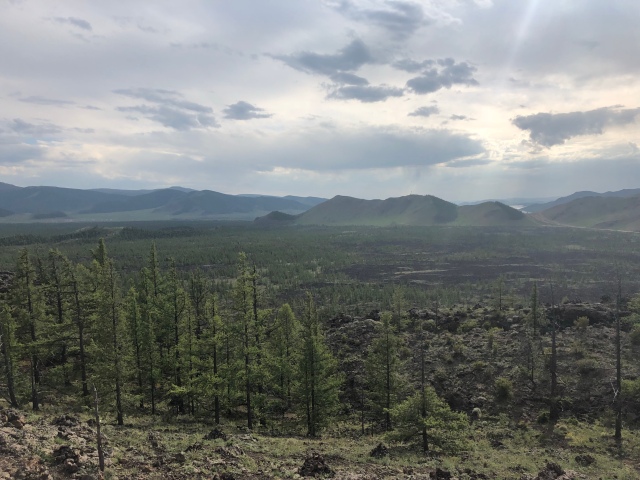 After the volcano we then headed a couple more kilometers to the camp. We got to the camp around 730pm and had dinner at 8pm. We were spending two nights at the camp, and it was nice to not have to repack our bags for the next day.

On our full day at the camp we went for a horse back ride, walked around the lake (got caught in a rain storm and hung out in a shop while it rained), played settlers, cooled beer in the lake to complement settlers, and read our books. It was a good day. One minor issue is that in the evening the power went out because a storm knocked down three power poles. Unfortunately they are a little slower than Boulder in getting the lines back up and running, and power was out all the next day also. Luckily we left that power grid before we could tell when the power was going to come back on. 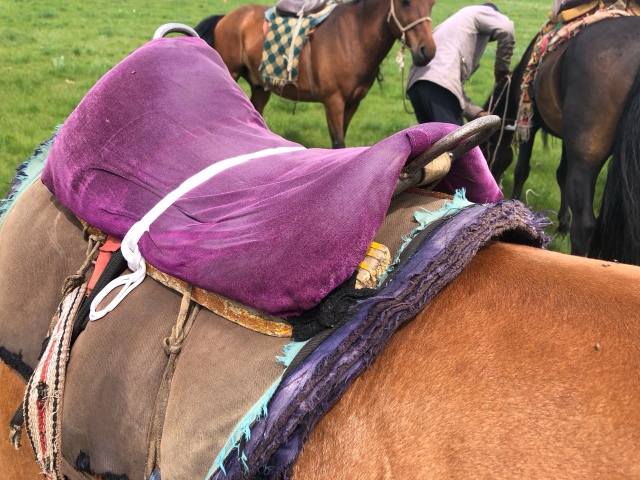 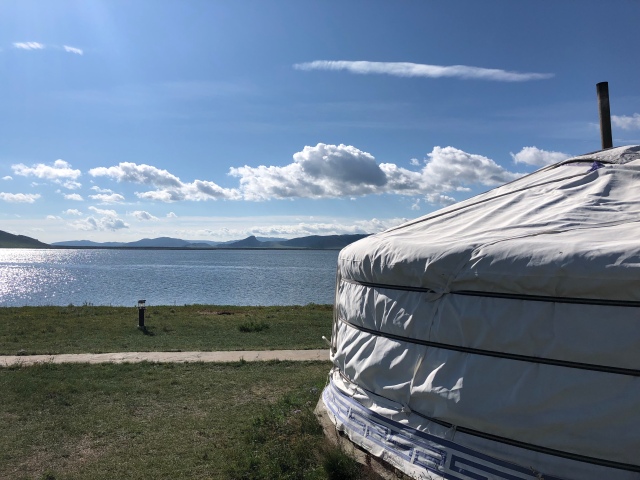 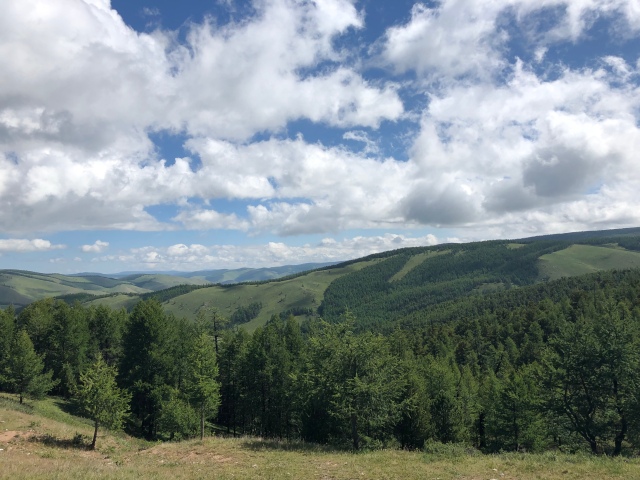 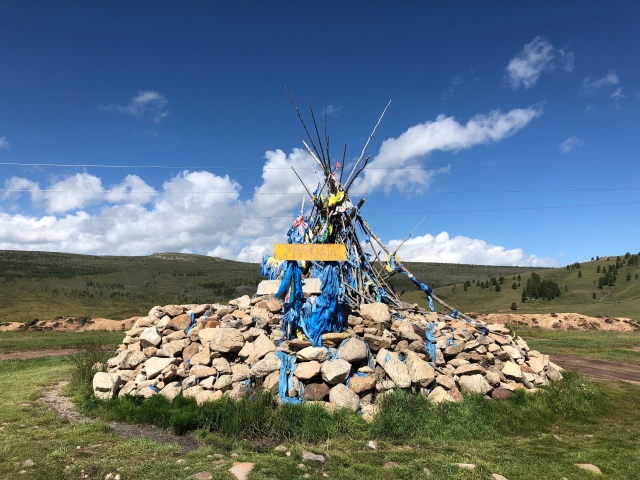 The hot springs was without power, and they needed power to run the pump to fill the pools, so we went for a walk up a hill in the afternoon. There were many, large grasshoppers, so our walk detoured to the town on a dirt road, which had less abundant grasshoppers (Katy says: I insisted). We first encountered a herd of cattle that was lounging in the road, and near the center of town we encountered a couple women driving their sheep and goats through the town. 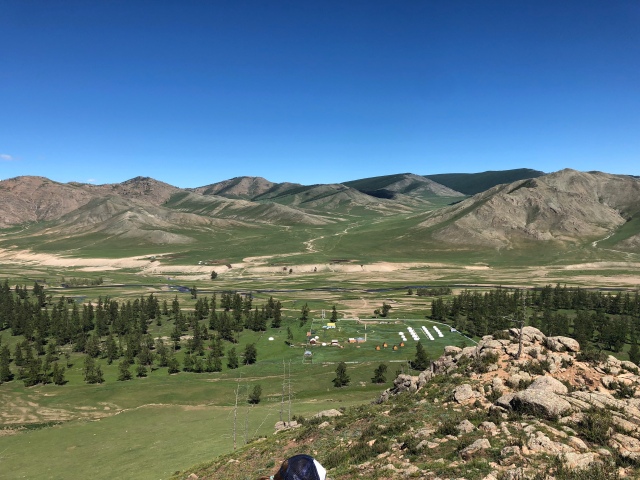 This area has of Mongolia has a lot more trees than a lot of the country we have seen. This means that people use a lot more wood in construction. The fences they have in town are nice solid fences instead of scraggly ones. A lot of the houses in town were prefab wood ones. Basically if you enlarged a set of Lincoln Logs into house size and built a house out of them you would get their houses. A prefab Lincoln Log house cost about $2000 if you were to build it in the region. If you were taking it to Ulaanbaatar it would cost another $1000 in transportation costs plus Ulaanbaatar has a wood tax which you would need to pay on wood imported into the city (even if it is domestic). 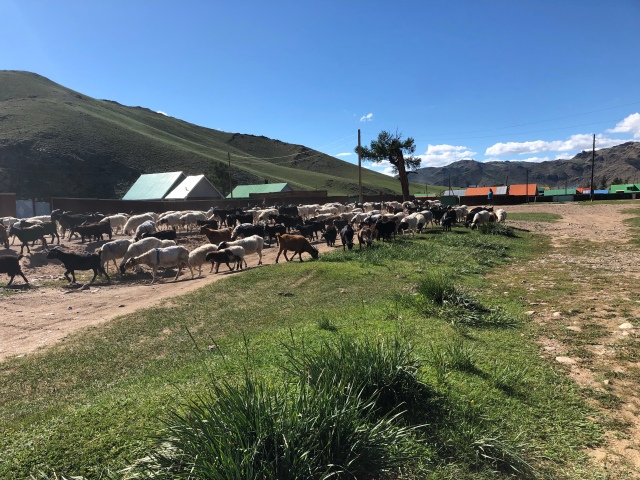 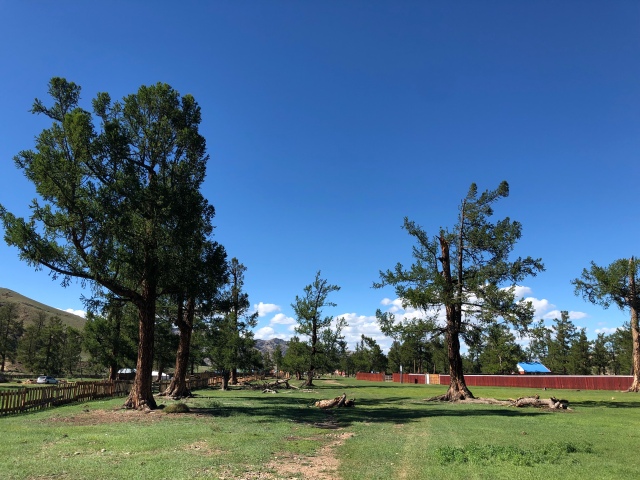 We got back to the ger complex and went to the hot springs. They were suppose to be sex segregated, but a coed group of Germans were dominating the men’s side so we took over the women’s side. The pool was a good temperature, and we stayed in long enough to get some good dehydration-induced spins when we stood up.

After dinner we played some Mongolian card games with our driver and guide. We learned two games. One was the same one that Elka showed us, except more nuances of the game were explained. The name of the other one translates to twister. It is a trump game most similar to euchre and was a lot of fun to play.

I grabbed a little post dinner hot tub time prior to another long driving day ahead. 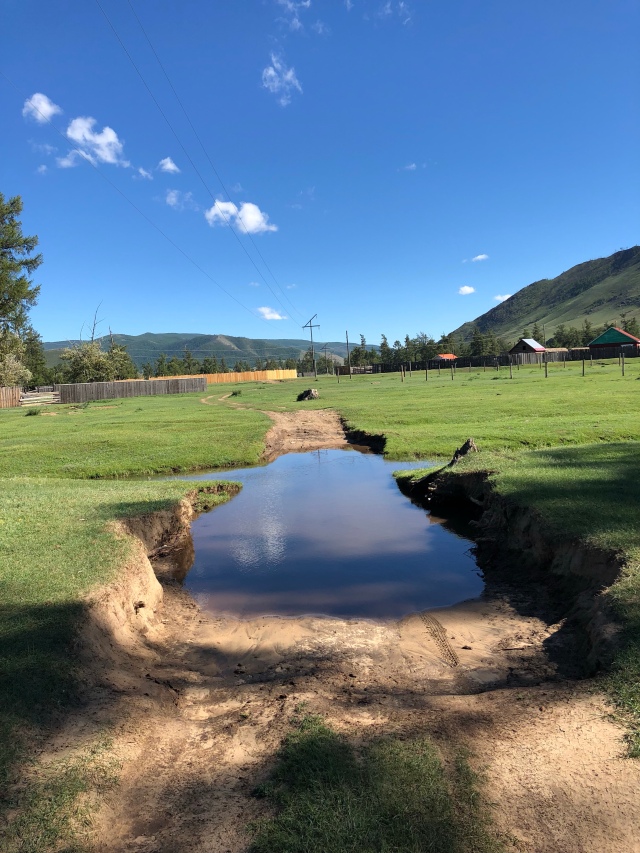